There are many fake antispyware and optimization applications out there with the sole intention of ripping you off, as is the case with Windows XP Recovery. This rogue defragmenter proclaims to be able to identify and fix system errors and improve your PC’s performance, but in reality this seemingly auspicious looking software is in fact a malicious application which offers your PC no benefit whatsoever. Despite its best efforts at convincing its prospective victims of its legitimacy, Windows XP Recovery is unable to live up to any of its promises, and will not fix any errors.

The first clue that you are dealing with a rogue application comes from Windows XP Recovery’s method of installing itself on your PC. Windows XP Recovery does not wait for an invitation and enters the system without the PC owner’s knowledge or consent. It will go on to root itself in the system and then start its attack against the PC. This will usually start with Windows XP Recovery initiating a fake system scan once the user logs on to Windows. This will be followed by reports of a long list of supposedly critical errors which will prevent the PC from running optimally. The user will then be prompted to purchase Windows XP Recovery in order to fix these errors.

As the attack progresses, the computer’s behavior will become increasingly more and more erratic. Windows XP Recovery will blame this erratic behavior on all the purported errors, but in reality it will be the rogue which is initiating all these symptoms. These symptoms range from the user receiving annoying pop up messages informing him of all the errors, and blocked Internet connections. The user will also not be able to launch any application on the system. This is simply done by the rogue in order to prevent the user from running or downloading any application which may be able to detect and remove Windows XP Recovery from the system.

There are numerous fake security alerts to be on the lookout for, the most popular reading as follows:

If you read the above fake alerts carefully, you will recognize that it is completely nonsensical and that it does not make any sense, as one warns that it the hard drive is missing. Should this have been the case the PC would not be able to operate in the first place. Windows XP Recovery will use the following fake alerts to prevent the user from running applications:

Hard Drive Failure
The system has detected a problem with one or more installed IDE / SATA hard disks. It is recommended that you restart the system.

The user is then presented with a call to action, and after closing this alert you will be presented with another alert that pretends to be for a program that will attempt to fix your hard drive:

PC owners are urged never to trust any correspondence received from Windows XP Recovery. This rogue application is not out to benefit your PC, but merely to rip you off. Restore your PC’s security and destroy Windows XP Recovery immediately. This can best be achieved by using a powerful security tool.

Download Remover for Windows XP Recovery *
*SpyHunter scanner, published on this site, is intended to be used only as a detection tool. To use the removal functionality, you will need to purchase the full version of SpyHunter. 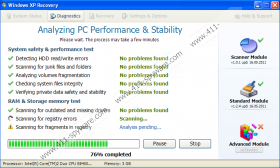