Antivirus 2010 is extremely dangerous to your computer and that doesn’t require an expert to determine. Even though this program is called Antivirus 2010 there is nothing pro-safeguard in it, because it a terrible computer threat that only pretends to be a beneficial program. This application is rogue antispyware that tricks unsuspecting users into believing that it is a good program that can protect their computers from harm. It also uses rootkits it hide its malicious presence from computer security tools that are already installed in the target computer. Therefore, it is clear that Antivirus 2010 has been created by cyber criminals that are out there only to rip easy financial gain, by stealing hard-earned money from innocent users worldwide.

You might not know when or how Antivirus 2010 infects your computer, because it does not need your permission to enter your system. For example, you might encounter some fake online malware scanner on the internet telling you that there’s a suspicious activity detected in your computer. Once you click on that bleeping message, the download of Antivirus 2010 would be initiated and the rogue would install itself without you even knowing it. Forget installation or download prompts. Rogues do not need that.

Antivirus 2010 infection is an obvious breach of your security. Since it can be related to Trojans, it can expose your personal information to a third party, at the same time performing a fake system scan, that is there to make you believe that you have viruses, Trojans and backdoors in your system. During the scan, you can see the type, name and details of the “threats” found in your computer. Even though the names are not made up (they belong to real existing parasites), they do not reside in your computer.

Just as the scan, these security notifications and alerts are not real as well:

Attention! Threat detected!
NOTEPAD.EXE is infected with Trojan-BNK.Keylogger.gen
Private data can be stolen by third parties including card details and passwords.
It is strongly recommended to perform threat removal on your system.

Attention! Network attack detected!
Your computer is being attacked from remote host. Attack has been classified as Remote code execution attempt.

These fake security alerts adds up to the overall Antivirus 2010’s master plan that is devised to rip you off. The rogue will also block your legitimate programs from running, urging you to delete the threats using Antivirus 2010, saying that these programs are infected and it is for your own safety that they must be blocked. Everything eventually leads to the user being forced into paying for this absolutely worthless program, and exposing his banking information to cyber criminals.

Do not be one of them. Remove Antivirus 2010 from your computer using a reliable antimalware tool. You can also try and remove it manually – as long as you manage to get rid of Antivirus 2010 once and for all, it does not matter which method you choose.

Download Remover for Antivirus 2010 *
*SpyHunter scanner, published on this site, is intended to be used only as a detection tool. To use the removal functionality, you will need to purchase the full version of SpyHunter. 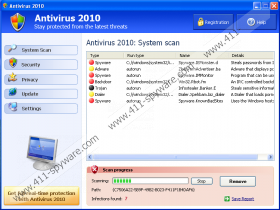