PC Defender 360 is a rogue antivirus program that gets onto the PC through its system vulnerabilities. The program is as dangerous as Antivirus System, System Doctor 2014, System Progressive Protection, and some other threats that are categorized as the Rogue.WinWebsec malware. It is crucial to remove PC Defender 360 from the PC, as this rogue program impairs the overall performance of the system.

If your computer is already infected with PC Defender 360, it is likely that you cannot browse the Internet and open Task Manager or Registry Editor. PC Defender 360 disables all executable files so that you cannot launch a security program or perform any other functions. Without a doubt, all the malfunctions that you face are presented as if they have been caused by the threats detected by the program in question. In order to get rid of all the Trojan horses that are said to be highly dangerous, various pop-up warnings recommend that you active the program, which you should not do. All those warnings and security alerts are fraudulent, and you should ignore all of them. Below you will some warnings that you may be already familiar with:

PC Defender 360 Firewall Alert
iexplore.exe is infected with Trojan-Downloader.JS.Agent.ftu. Private data can be stolen by third parties, including credit card details and passwords.

Upgrade to full version of PC Defender 360 software package now! Clean your system and ward off new attacks against your system integrity and sensitive data. FREE daily updates and online protection from web-based intrusions are already in the bundle.

You can easily get tricked by this threat as it does look like a security tool. It offers system scans, enables you to change Firewall settings and set particular preferences in the Configuration section. For example, it is said that PC Defender 360 can scan your Facebook news feed and look for dangerous links to insecure websites. Moreover, it is said that it can protect you from phishing websites, and, like the vast majority of security tools, start running once your Windows starts. However, PC Defender 360 is a scam, so do not give your money up but remove the infection from the PC.

If you have ever considered the possibility of buying the full version, forget about it as by filling in the purchase for will have to expose your personally identifiable information. You will have to enter your name, home address, and banking details.

Instead, install a reliable spyware removal tool that will remove PC Defender 360 and safeguard you against various types of infections. Our advice is to use SpyHunter as this application can eliminate the infection and provide you with real-time protection. Moreover, it will save your time for the system will be scanned automatically.

Before you implement the recommended tool you may like to register the program with the key given below. It will disable unwanted system scans and bogus security alerts.

Download Remover for PC Defender 360 *
*SpyHunter scanner, published on this site, is intended to be used only as a detection tool. To use the removal functionality, you will need to purchase the full version of SpyHunter. 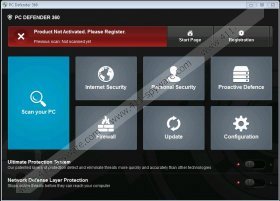 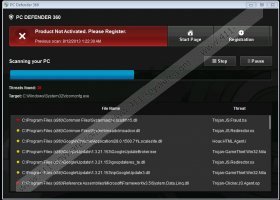 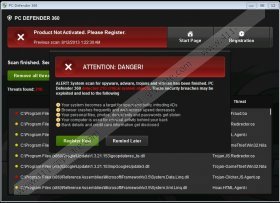