Deal Spy is yet another browser plugin from Innovative Apps (else known as 215 Apps). Once it is installed on your browser, it provides the same function as Coupon Caddy, Deal Boat or Savings Explorer. Namely - it provides you with coupon deals from a list of online stores, and it is supposed to help you save money on your purchases. Deal Spy claims that it looks for and provides you with the optimal offers from kmart, Expedia, Zales and many other online stores. It says that there are over a thousand shops on its list. However, even though this browser plugin is not extremely dangerous, you are advised to remove Deal Spy from your computer, especially if you did not intend to install it in the first place.

Unlike computer malware, Deal Spy does not need to use stealth technique to enter your system. The plugin does not get installed unless you trigger the installation yourself. Deal Spy can be downloaded at deal-spy.com which is its official website where you can read all the instructions and descriptions of what the plugin does. However, more often than not, the plugin comes bundled with freeware that you download on other websites. For example, such things as bit torrent clients usually come with various toolbars or plugins, and if you do not pay attention during the installation process, you end up installing additional programs as well (although you may not have had an intention to do so at all).

Due to the fact that Deal Spy is not a computer virus, it is not hard to remove it from your system. If you do not find this application useful, or if you are not an avid online shopper, you are highly recommended to delete Deal Spy from your PC following the instructions below:

Usually it is enough to remove Deal Spy via Control Panel to fully get rid of it, but if the plugin is still there on your browser, do the following:

After manual removal you are also advised to run a full system scan with SpyHunter free scanner to make sure that no other undesirable files are present in your system. Do take your computer system security seriously and invest in a reliable antimalware tool.

Download Remover for Deal Spy *
*SpyHunter scanner, published on this site, is intended to be used only as a detection tool. To use the removal functionality, you will need to purchase the full version of SpyHunter. 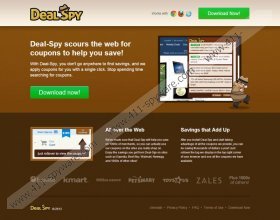