The fake antivirus program System Security was first detected in 2008 and all the bogus messages distributed by this application include the names of non-existent computer infections (such as Lsas.Blaster.Keylogger). It also claims that a number of system files are infected as well, including svchost.exe, which is actually an important system file that runs almost all of the time. Actually, were you to listen to System Security and delete svchost.exe you would not be able to run your PC properly.

According to System Security, once you invest in a full version of this application you will be able to remove Lsas.Blaster.Keylogger and all the other reported issues. However, were you to reveal your credit card date in the rogue’s purchase form, the cyber criminals behind this scam would gain access to your bank account and your money would be stolen.

Therefore, in order to get rid of the Lsas.Blaster.Keylogger fake security messages, you need to invest in a powerful antimalware tool and remove System Security from your computer. The problem is that most probably you have other dangerous threats in your PC as well, so run a full system scan with SpyHunter free scanner to figure out what other unwanted programs you need to remove. Once you have that settled, acquire a legitimate antimalware application that will protect your PC.

Download Remover for Lsas.Blaster.Keylogger *
*SpyHunter scanner, published on this site, is intended to be used only as a detection tool. To use the removal functionality, you will need to purchase the full version of SpyHunter. 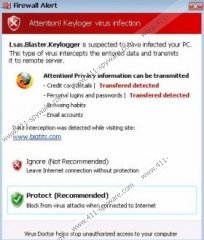 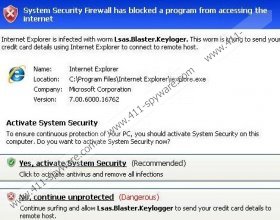