Winweb Security is not, as it claims, an anti-virus software. It is a con program invented to make people pay for its bogus full version. Like many other such applications, also called rogues, it uses a variety of mischief strategies to lure victims into spending money on a scam.

After creating the rogue, hackers make sure to compromise websites and hide Trojans in them. With the help of these Trojans, the rogue infection is delivered to a targeted computer. Only one click is enough to let the Trojan inside a system without the user's knowledge. Then Winweb Security is installed on the computer and the problems begin.

To start with, bogus alerts and notifications are displayed, claiming that a number of viruses have been found in the system. This is only the first step of the plan for scaring the user into buying Winweb Security. What follows is the phony scanning tool. As a way to make their creation look legitimate, hackers have even invented a list of infections. They have included rogue infections in it as well to make it seem genuine. In reality, the worst and in most cases – the only, malware in the system is the very program which claims to detect malware - Winweb Security.

When the scan is over, the victim is prompted to purchase the full version of the program in order to remove the security threats. What is more, pop-ups like the one below continue appearing as an attempt to frighten the user:

Provided that you notice this program's presence on your computer, you should keep in mind that paying for it is not the key to your problems. What you should do is to use a genuine anti-virus software and remove Winweb Security since it hinders the proper operation of your PC and might even crush your computer system completely at a later stage of the infection.

Download Remover for Winweb Security *
*SpyHunter scanner, published on this site, is intended to be used only as a detection tool. To use the removal functionality, you will need to purchase the full version of SpyHunter. 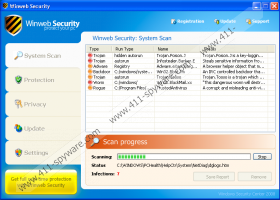