Despite hackers' attempts to advertise it as an anti-virus product, it is just another rogue program targeting vulnerable computers in order to take their users' money that is called WinDefender 2009.

What the villain uses to enter a machine are security loopholes, mainly caused by outdated software. It takes advantage of them with the help of Trojans – they sneak into the system and later on bring along the rogue program, but their first task is to start producing frightening messages that seem to be coming from Internet Explorer and warn about potential threats.

Soon after the first fake notification, the installation of WinDefender 2009 begins. As a beginning, the rogue creates its own registry entries and configures itself to start automatically as soon as Windows starts. Right at the end of the installation process, the scanning window of the deceitful application is evoked. The funniest thing about the presumable virus scans of this rogue is that they display a preliminary list of infections that includes the very Trojans which have brought the malware into the PC.

In the meantime, the pop-ups continue to bother the victim and their frequency becomes more rapid. Exactly at that point some users get scared and decide to purchase the software after all with the hope that it is a legitimate anti-spyware software. Unfortunately, the so called licenced version of WinDefender 2009 is also uncapable of detecting and removing malware. Furthermore, people who decide to buy it are guided to a scam webpage that requires all their personal and credit card details to be filled in. There is no need to say that this information may end up being further used by hackers which is extremely dangerous. This is why you should not let WinDefender 2009 trick you, but eliminate it immediately with the help of a genuine AV program.

Download Remover for WinDefender 2009 *
*SpyHunter scanner, published on this site, is intended to be used only as a detection tool. To use the removal functionality, you will need to purchase the full version of SpyHunter. 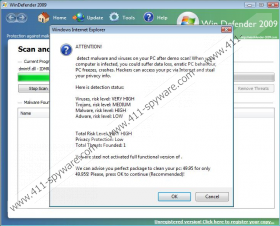