With all the threats facing healthy PCs these days, it has become increasingly more difficult for users to distinguish between genuine security applications and rubbish rogue antispyware tools like System Security 2011. This rogue antispyware application derives from the same family as OpenCloud Security, and will cause severe damage to the PC in its bid to extort money out of the user. Other rogues related to this threat are AV Protection Online, Cloud Protection, AV Guard Online, Security Guard 2012, Sysinternals AntiVirus, Milestone AntiVirus and AKM Antivirus 2010 Pro. System Security 2011 will also block the user’s access to the Internet and his applications, promote erratic system behavior and slow the PC to a crawl. Avoid this by entering any of these activation keys:

If you wonder how System Security 2011 manages to enter the system without your knowledge or consent, the rogue will use any tactic at its disposal to aid its surreptitious infiltration of the system. This may include using bogus online security scanners and seditious browser hijacking websites to forcefully root the System Security 2011 infection into the system.

However it manages to gain entry to the system this rogue will start its attack against the PC only once it is securely rooted. The first clue the user will have as to the actual presence of System Security 2011 on the system will be when the rogue launches a fake security scan of the system which will invariably yield fake positives of supposed crippling threats on the PC. This all forms part of System Security 2011’s attack against the PC, and shortly after this fake scan the user will receive the following falsely generated security alerts:

Security Warning Malicious programs that may steal your private information and prevent your system from working properly are detected on your computer.
Click here to clean your PC immediately.

Warning: Infection is Detected
Windows has found spyware infection on your computer!
Click here to update your Windows antivirus software

The rogue makes use of a black user interface with many shocking colors in order to capture its victim’s attention. It also uses icons and images similar to that of Windows in order to build on the user’s associated trust shared with Microsoft security applications. At the bottom left of the corner System Security 2011 displays a red button with the word ALARM displayed and “Your Security States AT RISK” next to it. These dramatic warnings are all attempts of System Security 2011 to further panic the user and make him believe that his PC is really under attack, and that System Security 2011 has the ability to protect it.

Users are urged never to believe any correspondence received from this malicious rogue. Those inexperienced with performing manual removals are urged to destroy System Security 2011 using a powerful and genuine security tool instead of going at it alone. Investing in such a security tool should be viewed as an investment in the system’s future performance.

Download Remover for System Security 2011 *
*SpyHunter scanner, published on this site, is intended to be used only as a detection tool. To use the removal functionality, you will need to purchase the full version of SpyHunter. 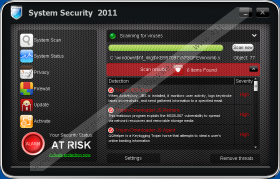