If you are in the market for a powerful security tool then you will not want to let Spyware Protect 2009 anywhere near your PC. This rogue antispyware tool is the product of criminal developers only out to swindle hardworking, honest consumers. Spyware Protect 2009 attempts to fool its victims into believing that it is a genuine security tool, but the truth is that Spyware Protect 2009 certainly does not have the ability to detect and remove any type of threat from the system, as it is nothing more than a malicious infection in itself.

Spyware Protect 2009 will enter the system without the user’s permission or knowledge. This is done with the help of browser hijacking websites, bogus online malware scanners and infected online flash ads. The user will remain unaware of the presence of Spyware Protect 2009 on the system until the rogue decides to reveal itself by initiating a fake system scan. This fake security scan will yield various bogus results in an effort to panic the user into thinking his PC is under attack, and that he needs to purchase Spyware Protect 2009.

Shortly following this the user will be presented with various falsely generated security alerts in the form of annoying pop up messages. These pop ups are also designed to panic the user into thinking his system is under attack. One of the more popular fake alerts to be on the lookout for reads as follows:

Windows Security alert
Windows reports that computer is infected. Antivirus software helps to protect your computer against viruses and other security threats. Click here for the scan your computer. Your system might be at risk now.

When all is said and done users are urged never to believe any correspondence received from Spyware Protect 2009. This rogue simply cannot be trusted. Other symptoms associated with this threat range from blocked Internet connections to increased erratic system behavior and poor system performance.

Download Remover for Spyware Protect 2009 *
*SpyHunter scanner, published on this site, is intended to be used only as a detection tool. To use the removal functionality, you will need to purchase the full version of SpyHunter. 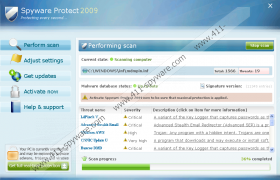