If there is something you need to watch out for when you browse the web it is Security Monitor 2012. It is a rogue antispyware program designed to make it look like you are infected with multiple viruses, and then offer its services to remove the supposed infections. However, by doing that Security Monitor only wants you to “purchase” the full version of the program. By spending your money on this completely worthless product you would reveal your banking information to a third party and as a result your bank account would be hacked, stealing all of your money.

To start with Security Monitor 2012 usually arrives at your system via blackhat SEO technique that redirects you to Net-Testnewhard.US website which is infected with the rogue. And then the rogue download is initiated automatically. When Security Monitor 2012 is installed in your computer without your consent, it pops a fake system scan window, making you think that an antivirus program is performing a full system scan looking for viruses. For any more information on Security Monitor 2012, you might also be directed to Securitymonitor2012.com that is an “official” website for the program for “more information”.

Another reason why it is obvious that no good can ever come of Security Monitor 2012 is the fact that this rogue is from the same nest as Antivirus Antispyware 2011, Total PC Defender 2010, Contraviro, Security Inspector 2010 and others. The relationship between the rogues is apparent due to their similar interfaces and the viruses that they find during the “scan”, for example: TrojanDownloader:JS/Renos, Downloader-BLV or Generic.dx!ae0965a7157c. Even though these names belong to real parasites, they do not reside in your computer, and you should not pay for the full version of Security Monitor 2012, because then your payment would be processed through this fraudulent site: secure.onlinestarpayment.com; and such information like your credit card number and expiration date would be leaked to a third party.

After the “registration” the rogue will stop spamming you with fake security notifications, and the removal will go smoothly. If you don’t know how to terminate Security Monitor 2012 on your own, invest in a computer safeguard tool that will take care of the rogue automatically.

Download Remover for Security Monitor 2012 *
*SpyHunter scanner, published on this site, is intended to be used only as a detection tool. To use the removal functionality, you will need to purchase the full version of SpyHunter. 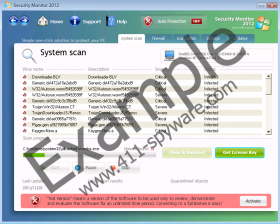