With all the fake security applications out there, it’s easy to become lax about the threats they pose – but don’t underestimate the vehemence and destruction of XP Security Center rogue antispyware application. This rogue first appeared in July 2008, and has been in operation ever since. XP Security Center was designed not to be of any benefit to a PC, but instead to act as a vehicle with which criminal developers rip unsuspecting PC owners off.

XP Security Center will use any tactic at its disposal to facilitate its surreptitious infiltration of its victims’ PCs. This infection is facilitated through using browser hijacking websites which forcefully redirect users from their browsing and search sessions to compromised landing pages. These compromised websites make use of drive-by download tactics in order to forcefully root the XP Security Center infection into the system. One such browser hijacking site is:

Shortly following this the user will be faced with various fake security alerts which will inform him of the same facts. These are all scare tactics employed by XP Security Center’s developers to trick the users into parting with their hard earned money.

Other symptoms associated with the XP Security Center scam include extremely poor system performance due to the consumption of valuable system resources, as well as increased erratic system behavior. Victims of XP Security Center have also complained about certain system folders’ contents being hidden from them as well as randomly generated and deleted Desktop items.

When all is said and done, this rogue is not able to protect your PC against any type of threat, attack or infection. You will do well to destroy XP Security Center and invest in a properly updated and functioning security tool which will offer adequate future protection against similar attacks and threats.

Download Remover for XP Security Center *
*SpyHunter scanner, published on this site, is intended to be used only as a detection tool. To use the removal functionality, you will need to purchase the full version of SpyHunter. 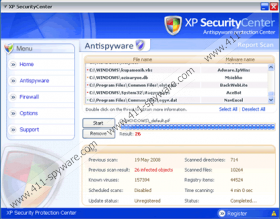