PC Speed Maximizer is presented as a registry cleaner that can clean your computer and increase your overall system speed. However, users are often encouraged not to trust PC SPeed Maximizer, because it is known to remove a number of legitimate antimalware tools from target computers, labeling them as malware. Not to mention that there is a possibility that PC Speed Maximizer will slow down your system performance instead of improving it. Therefore, you should not trust XP Micro Antivirus Online Scan and download any programs suggested by this fake scan.

Close the browser tab immediately and run a full system scan with SpyHunter free scanner to see whether you have any infections in your system because of XP Micro Antivirus Online Scan. Invest in a powerful antimalware program to safeguard your PC against dangerous threats.

Download Remover for XP Micro Antivirus Online Scan *
*SpyHunter scanner, published on this site, is intended to be used only as a detection tool. To use the removal functionality, you will need to purchase the full version of SpyHunter. 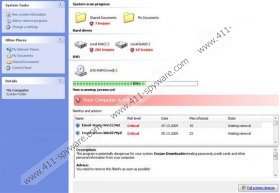