One can only marvel at the creativity of cyber criminals especially as they develop one rogue after the other, and sometimes simply make a lot of versions of the same computer threat in order to make their job easier. XP Internet Security 2012 is the kind of a rogue antispyware application, that belongs a huge cluster of rogues and their only difference is their names. This type of rogue generates its name randomly during the installation, based on the operating system the affected machine is running on. So if you had happened to have Windows Vista or Windows 7, XP Internet Security 2012 would have changed its name to Vista or Win 7 Internet Security 2012.

Since XP Internet Security 2012 is a rogue antispyware, it does not live up to its name, and it definitely cannot protect you from threats that await you in the vast spaces of the Internet. Quite the opposite – this program is a threat that reaches you from the internet as well, so you should never trust it. What is more, you should close XP Internet Security 2012 immediately, because this program is very adept at taking control of the affected computer. For example, it can block your executables and prevent you from opening certain websites in order to remain in your system for as long as possible.

XP Internet Security 2012 claims that your internet browser is infected, and it has to be shut down in order to prevent the spread of the infection to the other parts of your computer. The rogue announces this with the following fake security notification:

XP Internet Security 2012 Alert
Internet Explorer alert. Visiting this site may pose a security threat to your system!
Possible reasons include:
- Dangerous code found in this site's pages which installed unwanted software into your system.
- Suspicious and potentially unsafe network activity detected.
- Spyware infections in your system
- Complaints from other users about this site.
- Port and system scans performed by the site being visited.

Things you can do:
- Get a copy of XP Internet Security 2012 to safeguard your PC while surfing the web (RECOMMENDED)
- Run a spyware, virus and malware scan
- Continue surfing without any security measures (DANGEROUS)

Also, XP Internet Security 2012 “detects” such parasites in your computer as BWME.Twelve.1378, Email-Worm.JS.Gigger and many more. Needless to say, that they do not exist in your system, and the detection list is falsely generated by the rogue itself in order to push you into buying the full version of this useless program. Instead of spending your money and literally giving the key to your bank account to the criminals behind XP Internet Security 2012, “activate” the rogue using the following codes:

Once the rogue is “registered” it will be a lot easier to remove it with a reliable security program. If your internet access is blocked by the rogue, load your computer in Safe Mode with Networking (reboot and press F8 while your computer loads), and download the security program of your preference. Then restart your computer and load it normal mode again, to install the program and remove XP Internet Security 2012 for good.

When you are done, do not forget to perform a full system scan with the computer safeguard program once again, in search for any remaining components of XP Internet Security 2012, because this rogue is a lot harder to get rid of than you think.

Download Remover for XP Internet Security 2012 *
*SpyHunter scanner, published on this site, is intended to be used only as a detection tool. To use the removal functionality, you will need to purchase the full version of SpyHunter. 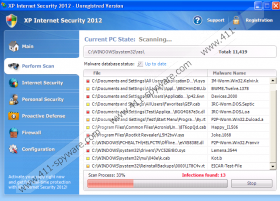