The truth is that XP Internet Security is a rogue antispyware application. It means that this rogue only pretends being a legitimate computer security program. It also copies the appearance (layout and color scheme) of official antivirus products, making it for inexperienced computer users hard to differentiate between the falsification and the real thing. That is why a lot of people get robbed easily as they get scared once they see the word “Infected” plastered all over XP Internet Security ’s interface.

Naturally, it might seem that XP Internet Security is right about the infection, because your computer is bound to work slower than the usual. Some of your exe files might be blocked from running, with an excuse that these programs are infected and they must be closed in order to prevent the infection from spreading into other parts of your system. XP Internet Security 2010 can surely appear to be a very useful program in “protecting” you like that, BUT! All these symptoms are created not by these viruses that the rogue reports you about. The pop-up messages, slow computer, and blocked exe files – XP Internet Security 2010 is behind all that. It crumples your computer little by little until it is almost impossible to operate, because the creators of this rogue want your money.

You should not wait until it is too late to do anything about it. Remove XP Internet Security from your computer the moment you notice the infection. Invest in a reliable computer security program that will be able to detect and delete all the components of this rogue automatically. The sooner to get rid of XP Internet Security the better, because this type of malware does not stop until your system is too crippled to operate it properly.

Download Remover for XP Internet Security *
*SpyHunter scanner, published on this site, is intended to be used only as a detection tool. To use the removal functionality, you will need to purchase the full version of SpyHunter. 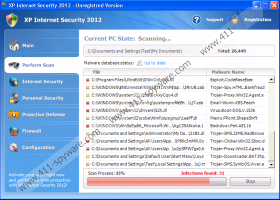