Even though you have to protect your computer from a whole list of dangerous threats, XP Home Security 2012 should be at the top of that list, because it is an extremely dangerous rogue antispyware application. It is dangerous, because it has a notorious background and belongs to a huge nest of rogues that generate their names at random during the installation. XP Home Security 2012 obviously targets the Windows XP users, and it can certainly make your computer experience into a total hell.

One of the reasons why this rogue’s infection is very frustrating is that XP Home Security 2012 blocks you from launching various executables and does not allow you to load certain websites, especially the ones that might have anything to do with malware removal. Actually, XP Home Security 2012 can go as far as block you internet browser in general, claiming that things will go back to normal once you remove the parasites with the full version of the program. But that way you would only lose your money, while XP Home Security 2012 would remain in your computer.

Instead of doing what the rogue wants you to do, “activate” XP Home Security 2012 with these activation keys:

This will stop the annoying security messages from appearing and you will be able to remove XP Home Security 2012 peacefully. If, by any chance, you cannot remove the rogue on your own, and your internet access is blocked, load your computer in Safe Mode with Networking (restart and press F8 to get the boot menu). When you load in the Safe Mode with Networking, download a reliable computer security program, and then restart your computer loading it in the Normal Mode, to install the application, and then terminate XP Home Security 2012 automatically. Do not forget to perform regular system scans, because you can never know when another infection might appear again.

Download Remover for XP Home Security 2012 *
*SpyHunter scanner, published on this site, is intended to be used only as a detection tool. To use the removal functionality, you will need to purchase the full version of SpyHunter. 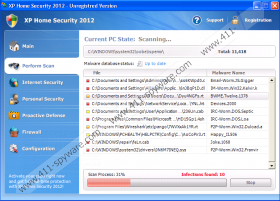