Online security is a major industry – and there are criminals who want their part of it, like the developers of XP Guard rogue antispyware application. This rogue derives from a long line of well-known rogues such as XP Internet Security 2010 and Antivirus Pro 2010. Of course XP Guard will pretend to emulate the workings of a real security tool and attempt to convince its prospective victims of its legitimacy, but at the end of the day this rogue does not have any of the abilities it professes to.

Despite all the over the top promises made by XP Guard, the rogue cannot detect or remove any type of threat from the system, and is incapable of protecting the system against any form of malicious attack. This rogue will use any means at its disposal to infiltrate the system surreptitiously. These tactics may range from using bogus online malware scanners and seditious browser hijacking websites. It will root itself in the system without the user’s knowledge, and will not seek the PC owner’s permission before rooting itself in the system.

Once XP Guard is securely entrenched into the system it will start its attack by initiating a fake system scan, which will inevitably yield fake results. These falsely generated results will declare that the system is under attack, and that the user should purchase XP Guard in order to stave off these attacks. Paying for XP Guard will not solve any problems, but will instead only add insult to injury. This is because the user will essentially be paying for a worthless piece of software.

Shortly after this the user will find himself presented with fake security alerts in the form of pop up messages. These were also designed and generated so as to panic the user into thinking his PC is under attack, and that XP Guard is a solid investment. Never believe any correspondence received from XP Guard, and be on the lookout for the following fake alerts:

Trojan detected!
A piece of malicious code was found in your system which can replicate itself if no action taken. Click here to have your system cleaned by XP Guard.

There are other annoying symptoms associated with the XP Guard infection – these vary from blocked Internet connections to the inability to launch applications and programs on the infected PC. Victims of XP Guard also complained about increased erratic system behavior and poor system performance.

When all is said and done the only way to protect your PC against the severe and inevitable damage associated with this rogue will be to thoroughly destroy XP Guard. This can best and safest be done by making use of a properly functioning security tool which will also offer adequate protection against similar attacks in future.

Download Remover for XP Guard *
*SpyHunter scanner, published on this site, is intended to be used only as a detection tool. To use the removal functionality, you will need to purchase the full version of SpyHunter. 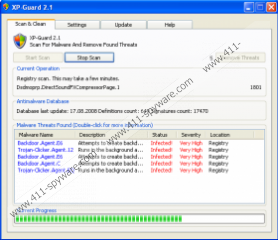