This rogue will enter the system surreptitiously and will not let up until the user either decides to pay for or remove XP Defender Pro from the system. It will not alert user to its presence until XP Defender Pro is ready to start its attack against the system. This will happen by XP Defender Pro initiating a fake system scan which will inevitably yield bogus results. Following this fake scan, the user will be presented with various fake security alerts in the form of pop up messages with the exact same intention in mind:

Tracking software found!
Your PC activity is being monitored. Possible spyware infection. Your data security may be compromised. Sensitive data can be stolen. Prevent damage now by completing security scan.

Other symptoms associated with XP Defender Pro include users not being able to connect to the Internet or launching applications on the infected system. Users have also complained about poor system performance and increased erratic system behavior.

Restore your PC’s security and destroy XP Defender Pro with the help of a genuine security tool which will not only erase XP Defender Pro but also protect your system against similar attacks in future.

Download Remover for XP Defender Pro *
*SpyHunter scanner, published on this site, is intended to be used only as a detection tool. To use the removal functionality, you will need to purchase the full version of SpyHunter. 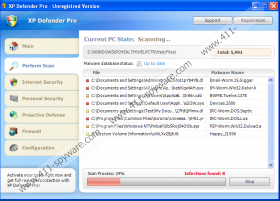