XP Defender 2013 is a fake security tool which will try to make you pay money for its non-functional full version. Ignore all its attempts to convince you that your computer is full of computer parasites, because the only threat that has to be removed is XP Defender 2013. This rogue anti-spyware is a clone of XP Internet Security, XP Guardian and other applications that are presented as reliable tools to protect the computer. The rogue is not able to perform any action related to computer protection due to the fact it is created to lure you into exposing your sensitive data and paying money.

It is not enough to look at the information provided by the infection, because the fact that it looks convincing does not mean that you can trust this tool. For example, XP Defender 2013 pretends that it can defend the system against worms or Trojans. The Perform Scan section of the cunning program shows that the supposed infections are detected on the computer. It could be Joke.1068, Happy_II.506, BWME.Twelve.1378 and others, and keep in mind that all of them are imaginary; hence, do not try to remove them manually, because it is highly possible to corrupt the system when trying to delete those imaginary threats.

Additionally, pay no attention to pop-up warnings displayed by this vicious tool, because their content is simulated to prompt you to register the program. The registration means that you are expected to spend your money on the tool that you do not actually need and that will not change anything. Some of the messages, which you should ignore are given as follows:

System hijack!
System security threat was detected. Viruses and/or spyware may be damaging your system now. Prevent infection and data loss or stealing by running a free security scan

Privacy threat!
Spyware intrusion detected. Your system is infected. System integrity is at risk. Private data can be stolen by third parties, including credit card
details and passwords. Click here to perform a security repair

Click Register to register your copy of XP Defender 2013 and perform threat removal on your system. The list of infections
and vulnerabilities detected will become available after registration

You may also find that you cannot access the Internet due to blocked internet browsers. Moreover, do not get surprised at the slowdown of the system or non-responsiveness of some executable files, because this is how XP Defender 2013 is trying to deceive you.

In order to remove the symptoms discusses and allow the computer operate normally, remove XP Defender 2013 as soon as you can. Ethical hackers provide users with a registration key disabling fake scans and pop-ups, which enables you to access the Internet and download a spyware removal program. After registering the bogus program, install, for example, SpyHunter, and remove XP Defender 2013 automatically. Malicious registry entries and files will be deleted, while the processes (created by the rogue) will be stopped. Nevertheless, if you do not trust anti-spyware tool, you may remove XP Defender 2013 manually, but keep in mind that it is highly advisable to scan the system after the manual removal procedures to make sure that no vicious elements of the rogue are left.

Download Remover for XP Defender 2013 *
*SpyHunter scanner, published on this site, is intended to be used only as a detection tool. To use the removal functionality, you will need to purchase the full version of SpyHunter. 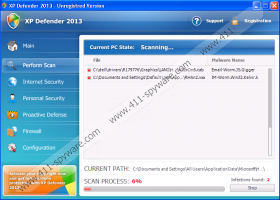 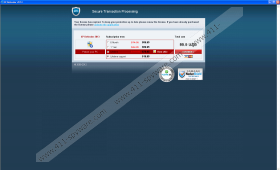