Naturally, the scan and the notifications received from XP Antivirus Plus 2013 are fake, and you should pay no attention to any of the following messages:

XP Antivirus Plus 2013 cannot protect you from harm, because it is a computer threat itself. It will try to remain in your system at all cost - the rogue is known to block your executable programs in order to protect itself. However, you can cancel out the rogue infection's symptoms by registering it with any of the following registration keys:

Do try the second one, if the first one does not seem to work. If you register XP Antivirus Plus 2013, you will have time to download a powerful antimalware program and remove the rogue for good. Automatic removal is highly advisable for inexperienced computer users, because an automated computer security program can protect the system from other serious infections.

Do leave a comment below if you have a question regarding XP Antivirus Plus 2013.

Download Remover for XP Antivirus Plus 2013 *
*SpyHunter scanner, published on this site, is intended to be used only as a detection tool. To use the removal functionality, you will need to purchase the full version of SpyHunter. 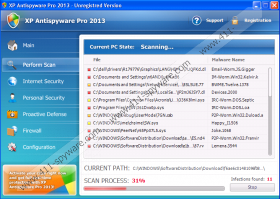 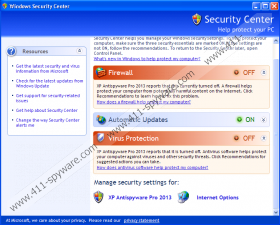 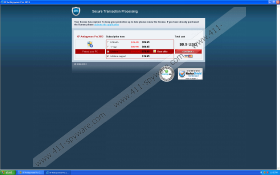