Your PC Protector's rogue family is enlarging, with the release of its new sibling - XJR Antivirus. Just as you might suspect, despite its tricky name, this is not an anti-virus program, but only a virus, aiming straight at your wallet.

With the help of Trojans, hidden in compromised websites, the rogue sneaks into computer systems and immediately starts displaying counterfeit alerts and warnings. All of them state that a huge number of infections has crept into the PC. The only infections present, however, are the ones that XJR Antivirus has brought along. To make the bogus notifications look legitimate, the villain makes them appear as security alerts from the Windows taskbar and Windows Security Center. The rogue also prevents you from running other applications by blocking them and displaying warnings. Some of the pop-ups produced by XJR Antivirus are:

Warning!
Running of application is impossible. The file C:\Program Files\Malwarebytes' Anti-Malware\mbam.exe is infected.

Security Warning
Malicious programs that may steal your private information and prevent your system from working properly are detected on your computer.
Clear here to clean your PC immediately.

Internet attack attempt detected:
Somebody is truing to attack your PC: This can result in loss of your personal information and infection other computers connected to your network. Click here to prevent attack.

The phony scanning tool of the program is later on evoked as an attempt to consolidate the statements from the alerts. The scan lists several viruses and insists that the victim should purchase its licence in order to remove the threats. Please note though most of the infections detected by XJR Antivirus are made up, some of them are legitimate programs that should not be deleted. Therefor it is not recommended not to try and remove any of them manually.

Upon installation, this rogue creates its own registry entries that help it launch automatically as soon as Windows starts. This is caused by two executable files - XJR Antivirus.exe and C:\Program Files\svchost.exe that must be stopped before you try to remove the rogue.

In conclusion, if you notice XJR Antivirus running on your computer, do not hesitate at all, but eliminate it immediately since it can only damage your computer system.

Download Remover for XJR Antivirus *
*SpyHunter scanner, published on this site, is intended to be used only as a detection tool. To use the removal functionality, you will need to purchase the full version of SpyHunter. 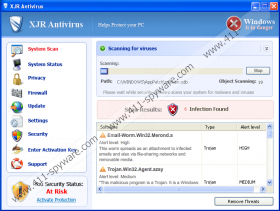