Renamed file names and .x1881 extension appended at the end of them can only mean your computer was infected with a dangerous malware called X1881 Ransomware. Unfortunately, so far there is no way to restore data damaged by this threat; of course, except the decryption tools that the cyber criminals behind this malicious program could have. However, our researchers say it might be dangerous to deal with these hackers as they could convince you to pay the ransom and then leave you without the promised decryptor. Later in the text, we will talk more about X1881 Ransomware, but if you are already determined to get rid of it, we invite you to use our recommended deletion steps available below or download a reliable security tool and erase the malware with its help.

It is hard not to notice the changes done to one’s data after the computer is infected with X1881 Ransomware. First of all, every encrypted file should be renamed. During its process the malicious program is supposed to replace the original title with a new name from random digits and letters, e.g., an encrypted file could look something like this: 3CEC51825929231E8682F98H5EFEH765.x1881. From the given example, you can also see that locked data might lose its original extensions as well since they should be replaced with .x1881. Our researchers say the malware could be after user’s personal files, such as his photos, documents, videos, archives, and so on.

At the end of the decryption process, we noticed the malicious program might drop a file carrying a message from the X1881 Ransomware’s developers. According to it, the user should contact the cyber criminals via the following email addresses: x1881@tuta.io, x1883@yandex.com, x1881@protonmail.com, and x1884@yandex.com. The note does not say what you will learn in return but based on our experience with similar threats we have no doubt the user would be asked to pay a ransom. For anonymity reasons, the cyber criminals would most likely ask it to pay in a digital currency called Bitcoin. It is difficult to say how much they could ask to transfer; still, you should consider such option very carefully.

Usually, the hackers suggest the user pays first, and then they promise to send the decryption tools. Thus, after transferring the money, the user can only hope the malware’s developers will bother to send the decryptor. Sadly, there are cases when users do not get the decryption tools even after doing all that was asked of them. Because of this, we advise against paying the ransom. It seems to us the safer choice would be to erase X1881 Ransomware and replace damaged files with copies you might have on removable media devices, cloud storage, social media, and so on.

Removing X1881 Ransomware manually is not particularly complicated process, although it could seem challenging if you are inexperienced. Still, there is no need to worry as you can eliminate the malicious program just the same or even faster with a security tool. Make sure you pick a trustworthy antimalware tool and have it installed on the infected device. Then run a system scan and press the removal button that should be provided after the computer is checked. After this, the ransomware and other identified threats should be deleted at once.

Get rid of X1881 Ransomware

Download Remover for X1881 Ransomware *
*SpyHunter scanner, published on this site, is intended to be used only as a detection tool. To use the removal functionality, you will need to purchase the full version of SpyHunter. 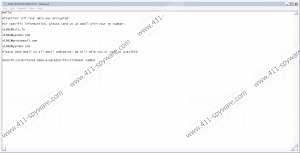