It has become impossible to protect one’s system against known threats such as WiniFighter without some type of help. This is because unlike blatant threats, WiniFighter and similar rogue antispyware applications pretend to be genuine security tools, when in fact they are just as dangerous and malicious as other threats. WiniFighter is unable to live up to any of its over embellished promises, and was never designed to protect a PC against any type of threat.

WiniFighter is sold online for $49.95. PC owners will not receive value for their money, and will not get what they are paying for. This rogue will proceed to completely hold their PCs to ransom and will not let up until the user either decides to pay for or obliterate WiniFighter from the system. In fact, as with any other type of rogue application WiniFighter will enter the system surreptitiously and remain hidden from the user until such time that it is ready to start its attack against the system.

The first clue the user will have as to the presence of WiniFighter on the system will come from a fake security scan which will inform the user that his system is under attack. This fake scan will soon be followed by numerous falsely generated security alerts in the form of pop up messages. All of these are merely tactics used by WiniFighter to panic the user into parting with his money for their worthless application.

Victims of WiniFighter complained about being unable to connect to the Internet, as well as the inability to execute applications on the infected PC. This is done in an effort to not allow the user to download or run any application with the ability to identify and erase WiniFighter from the system.

You will only be able to limit the damage WiniFighter will cause and restore the system’s security once you permanently destroy WiniFighter from the system. This can easily and safely be done by making use of a genuine security tool. This will also protect your PC against a similar attack in future.

Download Remover for Winifighter *
*SpyHunter scanner, published on this site, is intended to be used only as a detection tool. To use the removal functionality, you will need to purchase the full version of SpyHunter. 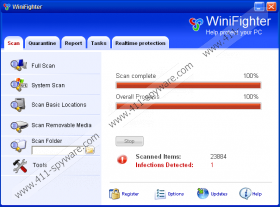