If your computer’s desktop has been changed to a shady Windows activation window, then it has been infected with malware known as Windows Support. Call TollFree: +1 -855-441-4421. Removal of this infection is a must because it will not go away if you enter the product key. Our research has shown that this application’s objective is to promote the bogus tech support number whose staff impersonate Microsoft’s employees and try to extract money from you by offering paid yet useless software. Fortunately, there is a way to get rid of this application, and we have included a manual removal guide at the end of this description.

Malicious applications that promote bogus tech support services are quite common these days, and we see an increase in their numbers. While most similar programs allow you to use your PC and prompt the fake error message occasionally, this particular application denies your entry to your computer entirely as it is set to launch on system startup and load its Graphical User Interface (GUI) instead of Windows Explorer. Research has shown that Windows Support. Call TollFree: +1 -855-441-4421 has been configured to modify the Shell registry string at HKLM\SOFTWARE\Wow6432Node\Microsoft\Windows NT\CurrentVersion\Winlogon (Win 64-bit) and HKCU\Software\Microsoft\Windows NT\CurrentVersion\Winlogon (Win 32-bit) to launch its executable error.exe instead of explorer.exe. Thus, this malicious application renders your computer useless.

We want to make it clear; this program is not set to delete your operating system’s activation key as the ERROR_LOCAL-USER_PRODUCT KEY MISSING message is fake. The developers have opted for the fake activation message approach for unknown reasons. We thought that they might try to steal the product keys, but research has shown that this application does not connect to a server that would collect the entered keys. Still there is no use of entering it because this will not change a thing.

In any case, this malware’s developers have prepared this application for something special because it features links to download websites of Supremo, TeamViewer, and Logmein. These are legitimate applications used to access and control computers remotely. These are a great tools for novice techies to help other people, and we think that the fake Microsoft tech support people might use them to “help” you resolve this Windows activation issue. They desperately want you to call +1 -855-441-4421 and ask for assistance, but you should not do that because you will not get anything useful. Instead, you might get scammed, so be wise and get rid of this infection as soon as possible.

We have found that Windows Support. Call TollFree: +1 -855-441-4421 is currently being disseminated using malicious bundled software installers that are featured on questionable freeware distributing websites. Such bundles hide additional software so this application should also be hidden from plain sight, and you probably will not be able to opt out from installing it. A powerful antimalware scanner such as SpyHunter can prevent this malicious program from entering your computer regardless of the type of software bundle it comes with.

However, if your computer has already been infected with this application, then, with a little bit of know-how, you can terminate its process and delete its files. Luckily, this program’s developers have included a CMD button that launches the Command Prompt, which is instrumental in terminating the error.exe file.

As you can see, there is nothing to worry about if your computer becomes infected with Windows Support. Call TollFree: +1 -855-441-4421. It was created with the purpose of promoting a bogus tech support number that may try to extract your money and will not deliver professional help. The good news is that it will not cause damage to the OS of your PC, and you can remove it by following the instructions that we have included at the bottom of this description.

Download Remover for Windows Support. Call TollFree: +1 -855-441-4421 *
*SpyHunter scanner, published on this site, is intended to be used only as a detection tool. To use the removal functionality, you will need to purchase the full version of SpyHunter. 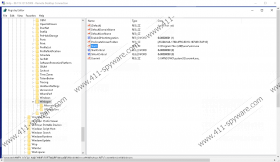 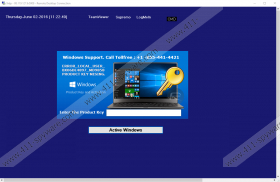