Dealing with rogue antispyware applications is always frustrating especially if the one you are infected with is something like Windows Attacks Defender. This rogue is very good at pretending to be a legitimate antivirus program, because it copies its layout and overall design from a famous antivirus application. Therefore, it is extremely hard for inexperienced computer users to tell the two things apart. However, you should remember that everything you have in your computer, you installed yourself, so if Windows Attacks Defender pops up telling you something about security and infections AND you have no idea where it has come from, then you have definitely been infected.

Most of the time, Windows Attacks Defender enters your computer via fake online video codec download. For example, you might encounter a video online, that you are not allowed to watch because you supposedly do not have the codec necessary to load the video. By making you download the so-called “codec” Windows Attacks Defender forces itself onto your system and then installs itself automatically without even prompting you about the installation. Then you need to deal with a whole lot of fake security notification messages and other annoying symptoms like the inability to load any of your favorite programs. Remove Windows Attacks Defender to get your computer back to normal, and if you cannot do it manually, then resort to using a reliable security tool that will terminate the rogue automatically.

After a more thorough research it has been established that Windows Attacks Defender belongs to the Rogue.VirusDoctor family of fake computer antispyware applications. Previous versions of this threat include Windows Attacks Preventor, Windows Firewall Constructor, Windows Basic Antivirus and many more. These rogues seem to be popping up every single day lately, and it just proves how eager their creators are to steal your hard-earned money.

Windows Attacks Defender does it by creating havoc in your computer and then offering its service to muck the dirt out. It “detects” malware in your system, such as Trojan.Win32.Qhost or Trojan-Proxy and blames these non-existent (well, obviously) threats for slowing down your machine, but it is none the other but Windows Attacks Defender that tries to destroy your computer in order to force you to pay for the worthless application.

Error
Keylogger activity detected. System information security is at risk.
It is recommended to activate protection and run a full system scan.

Download Remover for Windows Attacks Defender *
*SpyHunter scanner, published on this site, is intended to be used only as a detection tool. To use the removal functionality, you will need to purchase the full version of SpyHunter. 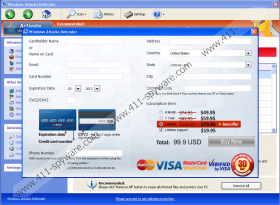 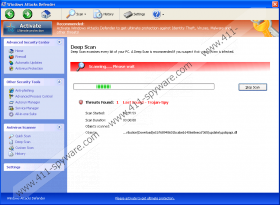 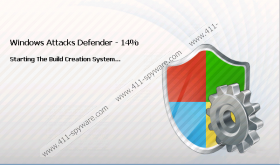