There are many criminal developers that make use of the Windows brand in order to promote their rubbish rogue security tools, such as Windows Antivirus Pro. This rogue antispyware application was designed with malicious intent in mind, and certainly not to be of any benefit to a PC. Of course Windows Antivirus Pro will do everything in its power to convince its prospective victims that it is indeed a genuine and user friendly security application – but this does nothing to change the fact that Windows Antivirus Pro is unable to protect the system against any type of attack or threat.

Windows Antivirus Pro makes use of various nefarious tactics to root itself in the system. These may vary from using bogus online malware scanners and seditious browser hijacking websites. These browser hijackers forcefully redirect users from their search and browsing sessions to compromised landing pages which use drive-by download tactics to root the Windows Antivirus Pro infection into the system.

The user will not be aware of the infection until Windows Antivirus Pro starts its attack by initiating a fake system scan each time the user logs on to Windows. This fake scan, along with bogus security alerts will inform the user that his system is being attacked, and that he should purchase Windows Antivirus Pro in order to stave off these attacks. Some of the fake alerts to be on the lookout for include the following:

Warning: Infection is Detected
Windows has found spyware infection on your computer!
Click here to update your Windows antivirus software.

Security Warning
There are critical system files on your computer that were modified by malicious program.
It will cause unstable work of your system and permanent data loss.
Click here to undo performed modifications and remove malicious software (Highly recommended).

Security Warning
Malicious programs that may steal your private information and prevent your system from working properly are detected on your computer.
Click here to clean your PC immediately.

As a further attack, Windows Antivirus Pro will not allow the user to access the internet or to launch any application on the infected system. This is done not only to annoy, frustrate and panic the user even more, but also to prevent the user from downloading or executing an application which may be able to erase Windows Antivirus Pro from the system. Each time the user attempts to launch an application on the infected PC he will be presented with the following bogus security notification:

Warning!
Running of application is impossible. The file C:\Windows\Notepad.exe is infected. Please activate your antivirus program

Your PC is a valuable investment – destroy Windows Antivirus Pro and take back control of your system. Save yourself the trouble and effort and make use of a powerful security tool which will protect your system from future similar attacks.

Download Remover for Windows Antivirus Pro *
*SpyHunter scanner, published on this site, is intended to be used only as a detection tool. To use the removal functionality, you will need to purchase the full version of SpyHunter. 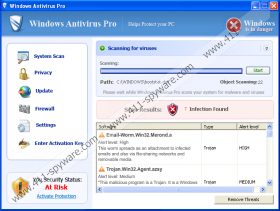