Windows Antivirus Patrol is a rogue anti-spyware program that imitates system scans and displays fraudulent pop-up warnings to make you think that the computer is infected with various computer threats. Its goal is to convince you that you have to invest in the program in order to have all those detections removed. According to the purchase form, the price of the application varies from $49.95 to $99.9, depending on the license. There is no need to waste money and risk you credit card information, which has to be provided in the purchase form, because Windows Antivirus Patrol has nothing in common with real malware and spyware detection tools.

Windows Antivirus Patrol can be installed alongside other programs. When browsing insecure websites, you may find corrupt links or offers to install some computer application. If the computer is not protected by a powerful anti-spyware program, you risk your personal information and system performance while browsing unreliable websites.

After registration, download and install SpyHunter, which will remove the infection and shield the system from other threats.

In case you do not want to register the application or find that the activation keys do not work, use the following instructions to remove Windows Antivirus Patrol.

How to remove Windows Antivirus Patrol

Download Remover for Windows Antivirus Patrol *
*SpyHunter scanner, published on this site, is intended to be used only as a detection tool. To use the removal functionality, you will need to purchase the full version of SpyHunter. 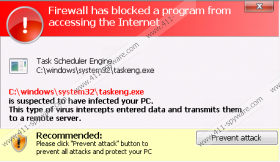 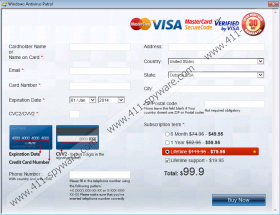 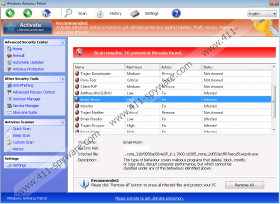