Guess what is following the exact same path of Windows Antihazard Center? It is their newest clone Windows Antihazard Helper, which is an identical copy of these previous fake antispywares. Malware schemers developed this new version in order to trick even more PC user than they have before, so be aware if you notice Windows Antihazard Helper’s computer scanner running in your computer, because you will not gain any useful services from this fake program, and it will only open up security backdoors for other fraudulent software to infiltrate. If this treacherous tool is in your PC, there is no time to wait and you need to remove Windows Antihazard Helper straight away!

To invade your system, Windows Antihazard Helper hackers will implement various security loopholes, so that the rogue could reach different PC users in different routes. It could come through a Trojan, a bundled download or an online scanner, which will make you think that your system is infected and then will trick you into downloading and running Windows Antihazard Helper setup yourself. This is why utmost care and reason is highly important when you surf the net. Once Windows Antihazard Helper invades, it will present a computer scanner, which will inform you with fake threats, and various security notifications will start flowing your way. Do not believe any of this, because none of it is realistic and is meant to fool you into paying money for a bootless security tool.

Remove Windows Antihazard Helper from your PC quickly, because this bogus antispyware does not belong in a healthy Windows system, as this tool will put your personal identity at risk, will “invite” additional malware and will NEVER protect your system from real threats! To delete all infected files acquire a legal antispyware tool, which will guard you against Windows Antihazard Helper, its clones and other malicious applications in the future.

On top of that, it will also spam you with the following fake security notifications:

It can definitely drive you mad, considering all of these messages are fake and there seems to be no other way to get rid of them, but to pay for the full version of Windows AntiHazard Helper. Do not even THINK of doing that! You will only lose your money while your computer will still be exposed to the infection. Better make use of this registration code:

Download Remover for Windows Antihazard Helper *
*SpyHunter scanner, published on this site, is intended to be used only as a detection tool. To use the removal functionality, you will need to purchase the full version of SpyHunter. 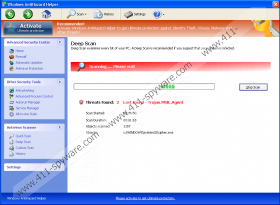 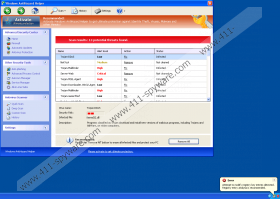 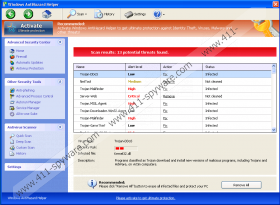