This rogue enters the system without any prompt from the user, and will remain hidden until such time that the rogue is able to start its attack against the system. This will usually happen by WinAntiSpyware 2008 starting a fake security scan each time the user logs on to Windows. This fake security scan will inform the user that his system is being attacked, and that he should pay for WinAntiSpyware 2008 in order to stave off these attacks.

Do this by investing in a genuine security tool which will not only erase WinAntiSpyware 2008 but also protect your system against similar future attacks.

Download Remover for Winantispyware 2008 *
*SpyHunter scanner, published on this site, is intended to be used only as a detection tool. To use the removal functionality, you will need to purchase the full version of SpyHunter. 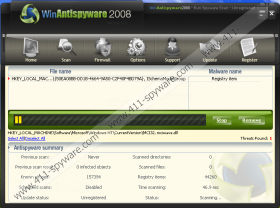