The moment WinSecurity360 roots itself in the system the rogue will alert the user to its presence by initialing an unwarranted fake security scan of the system. This fake scan will inevitably yield bogus results which will endeavor to panic the user to pay for its worthless software. Users are urged never to pay for any WinSecurity360 product. Shortly after this, WinSecurity360 will start to spam the user with various fake security alerts in the form of pop up messages. These fake alerts should also be disregarded.

Symptoms reportedly associated with the Win Security 360 infection range from users being unable to connect to the Internet, as well as not being allowed to launch applications and programs on the afflicted PC. This is done not only to panic and frustrate the user even further, but also in an effort to prevent him from downloading or running an application which may be able to identify and remove WinSecurity360 from the system. Each time the user attempts to run an application, he will be met with the following fake alert barring him from doing so:

Application .exe has crashed because of Conficker.Worm Virus.
Infected File: Potential Risks: Viruses is spreading over your PC and the system status is unsafe. Your service provider may lock you out of internet access, because your PC is potentially harmful.
Viruse's actions: Steal your personal data and send it to the remote host. Spread between your friends quickly (via internet or storage drives). Send spam and malicious codes from your computer.

Users have also complained about increased erratic system behavior and poor system performance, all attributable to Win Security 360. This rogue security application is completely worthless, and unable to live up to its fake promises. It will certainly cause your PC even more damage than it will ever do goo. In order to limit the damage it will be able to cause your PC, eradicate Win Security 360 for good before it destroys your PC.

Download Remover for Win Security 360 *
*SpyHunter scanner, published on this site, is intended to be used only as a detection tool. To use the removal functionality, you will need to purchase the full version of SpyHunter. 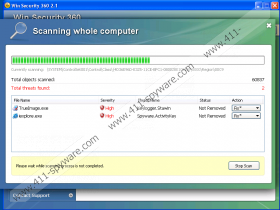 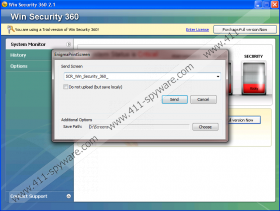 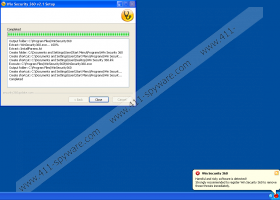