If you are concerned with the good functioning of your system, then you will certainly not want to allow WinDisk anywhere near your PC. This rogue defragmenter was never designed to complement any PC, but instead to act as a vehicle with which unscrupulous cyber criminals rip naïve consumers off. This is evident in the fact that WinDisk is unable to detect or fix any type of error on the system. It will, however, attempt to convince the user of its authenticity, but users are urged never to trust any correspondence received from WinDisk.

WinDisk enters the system without the user’s acquiescence. This is done through a variety of nefarious ways, most notably through using bogus online malware scanners. These fake malware scanners appear to be legitimate Windows scans due to the fact that they emulate the GUI of a Windows operating system. It will then simulate a PC scan and inform the user that his PC is weighed down under various crippling PC errors, and that the user needs to download WinDisk. Other tactics forming part of WinDisk’s online marketing campaign vary from using seditious browser hijacking websites and infected online malware scanners. As of late it has also been reported that WinDisk bundles its Trojans and malware together with third party downloads and updates, and in this way roots the WinDisk infection into vulnerable PCs.

Once the rogue manages to securely root itself in the system it will not let up until the user either pays for its worthless software, or decides to get rid of WinDisk instead. It will start its attack on the system by editing registry settings so that to allow itself to execute each time the user logs on to Windows. It will then initiate a fake system scan which will inform the user of various errors and problems preventing the system from functioning optimally.

WinDisk will proceed to spam the user with various fake security error messages, all aimed at panicking the user into paying for WinDisk, as well as frustrating the user even further. These are all fake and should not be taken seriously. Some of the most popular fake alerts to be on the lookout for reads as follows:

Critical Error!
Windows was unable to save all the data for the file \System32\496A8300. The data has been lost. This error may be caused by a failure of your computer hardware.

The above fake alerts should speak for themselves. Some errors report on being unable to locate hard disk space. If this had been the case, the system would not be able to run in the first place. This all points to the fact that WinDisk is indeed a fake and malicious application which is only out to rip you off.

As a further attack on the system WinDisk will not allow the user to launch any executable on the infected PC. It will spam the user with these fake alerts each time the user attempts to launch an application:

Windows cannot find notepad. Make sure you typed the name correctly, and then try again. To search for a file, click the Start button, and then click Search.

After the user closes these alerts, he will be presented with another alert that pretends to be for a program that will attempt to fix the hard drive:

If the user presses the Start button, it will pretend to scan your computer and then state that there is something wrong with it. This message is:

When all is said and done, WinDisk does not present any type of benefit to your PC, and will cause much more severe damage than any good. In order to limit the damage this rogue will be able to cause, destroy WinDisk with the help of a properly functioning security tool which will not only obliterate WinDisk but also protect against similar attacks in future.

Download Remover for Win Disk *
*SpyHunter scanner, published on this site, is intended to be used only as a detection tool. To use the removal functionality, you will need to purchase the full version of SpyHunter. 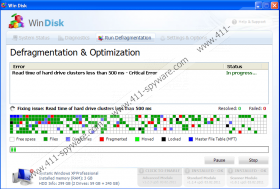