Win 8 Security System is a cunning program that you may find on your PC without any easily explicable reason. The truth is that this infection enters the computer’s system unnoticed if the system is not protected with a legitimate and regularly updated security program. Suspicious websites, online scanning, infected email attachments and other ways of social engineering may cause you this type of infection, which should be removed immediately after noticing it on the PC.

Win 8 Security System is impossible not to notice, because it has a professional-looking interface, which even being simulated is very convincing and appealing, because the rogue pretends that it launches scans of system. Like a legitimate program, Win 8 Security System also lists various infections and displays annoying pop-up balloons warning you to active the program to delete the infections detected. Note that Win 8 Security System cannot detect and remove computer infections, because its aim is just to lure you into buying its simulated full version, which means that you may lose your money voluntarily.

To avoid being deluded into the purchase of the non-functional full version, remove Win 8 Security System from your PC with an acknowledged spyware removal tool. The infection will be fully deleted, because a powerful removal tool is able to detect and eliminate every single component of the infection. Nonetheless, if you know how to kill dangerous infections, delete Win 8 Security System on your own, but keep in mind that you should not miss anything related to the infection so that the rogue will not be renewed in the system.

For removal you can enter this serial with any kind of fake email: Y86REW-8F42D6E3-FD18

Win 8 Security System is a bogus application, and you should be very resistant to its attempts to make you buy its fake full version, which will simulate removal operation and make you think that this is how it deals with malware. Below, you will find some extracts from the messages presented by the rogue:

Threat detected!
Security Alert! Your computer was found to be infected with privacy-threatening software. Private data may get stolen and system damage may be severe.
Recover your PC from the infection right now, perform a security scan.

Alert System scan for spyware, adware, Trojans, and viruses is complete. Win 8 Security System detected 26 critical system objects. These security breaches may be exploited and lead to the following.

Ignore the number of threats given after simulated scans, because the only dangerous infection is the rogue itself. It is the only cause of the lack of the Internet, immobility of some programs and overall performance of the PC. There is no need to activate the malicious program to remove the infections and secure the system in this way, because all the difficulties disappear as soon as you remove Win 8 Security System.

Along with the symptoms, such bogus threats as Win.32.Worm.Prolaco, Backdoor.Bifrose, AprNet-Worm.Win32.Kolab will disappear. These and other infections should be never regarded as genuine, because are used to make you pay money and expose your personal sensitive information. The sooner you remove Win 8 Security System, the better it is for you and your computer. Thus, use a reliable spyware removal application, because a professional tool will delete the infection successfully and not cause damage to the system. All the elements of the cunning application will be deleted completely, and you will not need to worry about future infections, because the program will protect the system, as well.

Download Remover for Win 8 Security System *
*SpyHunter scanner, published on this site, is intended to be used only as a detection tool. To use the removal functionality, you will need to purchase the full version of SpyHunter. 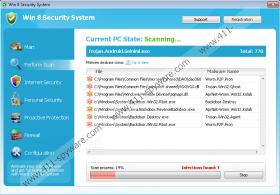 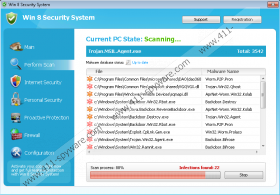 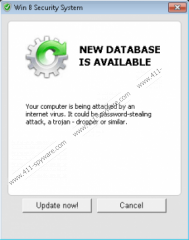