There is no doubt that Win 8 Antivirus 2014 is a fake security application/malware remover. Even though the interface of this program suggests that the program can identify existing threats, delete malware and protect your virtual security, truthfully it is just a rogue which has been created by cyber criminals. The same schemers may release XP Antivirus 2014, Vista Antivirus 2014 or Win 7 Antivirus 2014 to create a widespread attack. Of course, you have to remove this malware from the operating system, regardless of which version you operate, as soon as possible. So, how should you delete Win 8 Antivirus 2014?

Devious rogue antispyware programs are usually reinforced by misleading interfaces, and this is not different with Win 8 Antivirus 2014. The program presents a stylized Windows logo, suggests that your security level is LOW and offers to employ the full version of the fictitious malware remover. The interface of the rogue mimics the colors and the layout of the Windows 8 interface, and this is what confuses the targeted users. To create the illusion of attacking malware, Win 8 Antivirus 2014 automatically initiates a system scan and lists tens of different threats you supposedly need to remove. The removal of fictitious threats may be suggested by irritating pop-up warnings, like the one below.

Win 8 Antivirus 2014 has blocked a program from accessing the internet
This program is infected with Trojan-BNK.Win32.Keylogger.gen
Private data can be stolen by third parties, including credit card details and passwords.

This is a warning you may be presented with after trying to launch a browser, Task Manager, Registry Editor, and other Windows utilities. If you do not delete Win 8 Antivirus 2014, this threat will remove your privileges to run executable files and, possibly, connect to the Internet. Unfortunately, this disruptive activity may be falsely linked to the supposedly existing malware that you will be pushed to delete. If you try this, you will be asked to purchase the real version of Win 8 Antivirus 2014. Regardless of the sum requested or the discounts offered, you must not expose your private information or give away your money. Instead of doing this, you must remove Win 8 Antivirus 2014. Unfortunately, the removal of this threat is quite complex, particularly if you choose to delete existing malware by yourself.

Fictitious malware removers from the Braviax family are usually spread using drive-by download scams or with the help of existing Trojans. Either way, your operating system may be infected by multiple different threats that require removal. If you are sure you can delete Win 8 Antivirus 2014 and other malware manually, begin the operation without any delay. Restart the system in the safe mode, terminate malignant processes, and then delete registry entries and files associated to malware. These tasks are highly complicated, and less experienced users may make detrimental mistakes. Therefore, we suggest leaving Win 8 Antivirus 2014 removal to reliable software. The guide below will help you reboot the PC and install a legitimate and powerful malware removal tool SpyHunter.

Download Remover for Win 8 Antivirus 2014 *
*SpyHunter scanner, published on this site, is intended to be used only as a detection tool. To use the removal functionality, you will need to purchase the full version of SpyHunter. 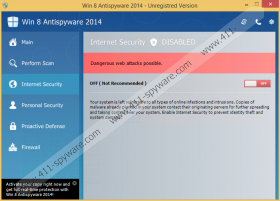 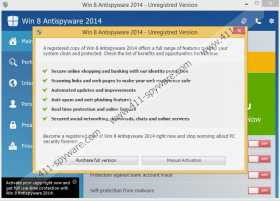 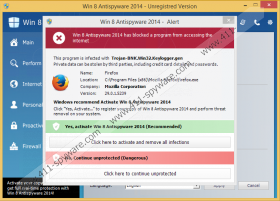