Win 7 Antivirus Plus 2013 is a fake anti-virus program that can enter your computer via security backdoors that may allow schemers to act without your authorization. Even though you could have installed the infection by opening spam email attachments or installing encrypted software, it is also possible that security vulnerabilities are exposed by Trojan infections. In case this is true, you will need to delete Win 7 Antivirus Plus 2013 and inspect your PC to make sure that no other malicious programs are running surreptitiously.

Rogue anti-spyware applications are designed to resemble legitimate security tools so that you would trust information provided by them. Despite this, you need to recognize that the malicious application is fictitious and cannot produce any reliable information or malware removal services, for that matter. The interface of the deceptive rogue is truly convincing because it uses authentic Windows 7 color scheme and even stylized Windows logo.

Win 7 Antivirus Plus 2013 scanner is a particularly deceptive attribute as it can trick you into thinking that your computer is under the attack of Exploit.CodeBaseExec, Email-Worm.VBS.Peach and similar fictitious infections which you do not need to delete because they do not exist! Unfortunately, you may start thinking that these fake infections do require removal as you will notice removed access to the Task Manager and Registry Editor and will not be able to run most executable files. This will make it impossible to delete the rogue manually.

Another thing you will not be able to remove is the fake security pop-ups that the rogue will produce to strengthen the illusion of supposedly invading spyware:

System hijack!
System security threat was detected. Viruses and/or spyware may be damaging your system now. Prevent infection and data loss or stealing by running a free security scan.

It is extremely difficult to delete Win 7 Antivirus Plus 2013; however, you need to begin with its removal as soon as possible. You can start by applying one of these activation codes, which are meant to remove symptoms and help you regain control over the PC:

Activated codes will not delete the infection, simply allow you to move forward faster with its removal. You will be able to access the Internet without the disturbing pop-ups or other dysfunctions and install the automatic rogue removal tool SpyHunter, which will not only delete Win 7 Antivirus Plus 2013 but will also ensure that similar attacks do not occur in the future.

Download Remover for Win 7 Antivirus Plus 2013 *
*SpyHunter scanner, published on this site, is intended to be used only as a detection tool. To use the removal functionality, you will need to purchase the full version of SpyHunter. 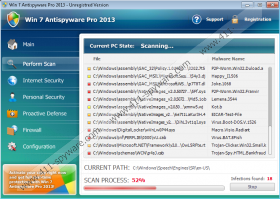 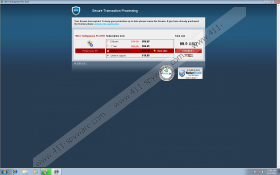 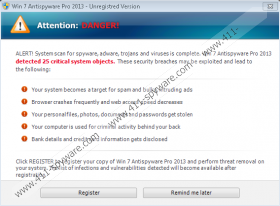