If suddenly a new window pops up on your computer, and a program called Win 7 Antivirus 2014 launches a full system scan, it means that you have been infected with a rogue antispyware application. This program cannot delete your files, but it can seriously cripple your system, especially if you do nothing to take care of it. Manual removal is not recommended because Win 7 Antivirus 2014 affects the system deeply, but you can get yourself a legitimate computer security tool and remove Win 7 Antivirus 2014 automatically. At the same time, you will be able to safeguard your PC against similar threats in the future.

Needless to say, the main infection you have to deal with here is Win 7 Antivirus 2014. When it enters your computer, it configures itself to auto-start with Windows. Hence, whenever you turn on your computer, the Win 7 Antivirus 2014 scan window will be there. What is more, the program cannot be uninstalled via Control panel although it claims to be a genuine security application. It also slows down system performance and block .exe files from running. Win 7 Antivirus 2014 says that you cannot run various programs because they are infected with Trojans, but this symptom is caused by the rogue itself.

Everything is done in order to make Win 7 Antivirus 2014 stay on your PC for a longer period of time. It wants your money, but it cannot steal your personal information itself. The rogue requires you to fill out a license purchase form with your name, address and financial information. Do not give away your real financial data because cybercriminals will be able to use for illegal financial operations!

To get rid of Win 7 Antivirus 2014, enter incorrect information into the purchase form and simply click the OK button to submit it. Since this rogue is not a very complicated application, it will not be able to tell whether the submitted information is correct or not. It will simply “think” that you have given away your financial information, and all the infection symptoms will disappear for a while.

This is your time. Use it to remove Win 7 Antivirus 2014 automatically before the rogue comes back. Invest in a legitimate antimalware application that will help you ensure your system’s safety and stability in the future.

Download Remover for Win 7 Antivirus 2014 *
*SpyHunter scanner, published on this site, is intended to be used only as a detection tool. To use the removal functionality, you will need to purchase the full version of SpyHunter. 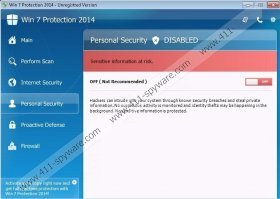 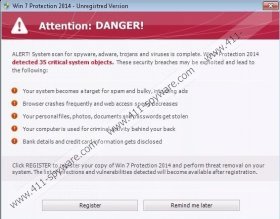