It is unbelievable how much the creators of rogue antispyware can squeeze out of one single rogue. Win 7 Antivirus 2012 is a perfect example for it. This rogue is a fake antivirus program that has been created to rip you off, and the most stunning thing is that it actually just one version of malicious software, that can generate a whole list of names for itself, depending on the operating system of the affected machine. So if you get infected by Win 7 Antivirus 2012 and your neighbor has XP Antivirus 2012, it means you are infected by the same rogue, and the name differs because you have Windows 7 and your neighbor is still using Windows XP.

Win 7 Antivirus 2012 enters your system without your knowledge or permission, and it might be hard to remove it on your, especially considering the fact that the rogue does everything in its might to remain in your machine. If a user wants to avoid being infected with Win 7 Antivirus 2012, he has to steer clear of suspicious websites, because Win 7 Antivirus 2012 is very good at using infected flash advertisements, browser hijackers and fake online malware scanners for its distribution.

You will notice the infection immediately, because Win 7 Antivirus 2012 loads at once after the installation and performs a fake system scan. During the scan it “detects” multiple viruses in your computer and then urges you to terminate them immediately. If you click the Remove button, Win 7 Antivirus 2012 will ask you to pay for the full version of the program, because only the licensed version can “delete” the viruses. That is a blatant lie, because Win 7 Antivirus 2012 only wants to get a hold of your credit card number, expiration date and the CVV2, so that the people behind it could access your bank account and then perform various illegal financial operations, little by little stealing your hard-earned money.

Unfortunately, there are a lot of users who fall into the trap, and that is because Win 7 Antivirus 2012 is very good at pretending to be a legitimate part of Windows operating system. This rogue presents itself as a security update for Windows that is installed through Automatic Updates. It even copies the layout of the Windows Security Center to make you believe that it is real. However, just as it has been mentioned above, believing in Win 7 Antivirus 2012 would cause detrimental damage and you should never do that.

Instead, you should terminate Win 7 Antivirus 2012 immediately, before it blocked all of your exe files and you internet connection. "Register" the rogue with these activation codes first:

When you do that, get yourself a reliable computer safeguard program and remove Win 7 Antivirus 2012 for good. If the rogue blocks your exe files and your internet, reboot your computer and press F8 to load it in Safe Mode with Networking. Then download the security program of your preference and restart your computer again to install it in normal mode and then terminate the rogue immediately.

Download Remover for Win 7 Antivirus 2012 *
*SpyHunter scanner, published on this site, is intended to be used only as a detection tool. To use the removal functionality, you will need to purchase the full version of SpyHunter. 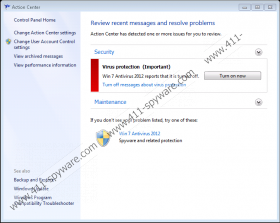 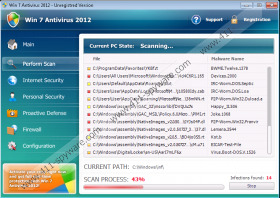 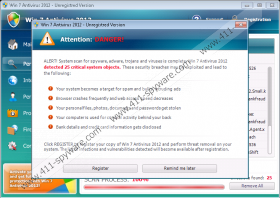