Whoopsie Ransomware is another malicious application that might be still in the development stage. Our specialists think it is possible because even though the threat encrypts files on the computer, it infects and shows a ransom note; it does not say where to transfer the money. In other words, victims who may encounter this malicious application could be unable to pay the ransom. Of course, we would not advise paying it even if it was possible since there is always a possibility the cybercriminals will not hold on to their promises. It seems to us users who do not want to risk being scammed should merely erase the malware and find another way to restore their data. If you wish to learn how to remove Whoopsie Ransomware manually, you should follow our recommended deletion steps located at the end of if this text. Naturally, to learn more about it, we encourage you to read our full report.

Knowing the malicious application could be still in the development stage, it is entirely possible the threat might not be distributed yet. However, if we had to list its possible distribution channels, we would suggest Spam emails and fake installers as they are probably the most popular channels to spread threats like Whoopsie Ransomware. As always to keep the computer safe from such malware we advise ignoring files received with Spam, from unknown senders, or raising any suspicion. Besides, it would be smart to stay away from torrent web pages or other file-sharing websites alike that could distribute malicious installers. Another way to protect the system from possibly dangerous content is to scan all suspicious files received from unreliable sources with a reputable antimalware tool first. All there is to do is pick an application you could trust and keep it up to date.

What happens if Whoopsie Ransomware manages to sneak in? Our specialists report the malware should encrypt all files located on the infected device except the data belonging to the operating system or software installed on it. It means the threat should mostly ruin personal files, data like photos, pictures, videos, various documents, and so on. To recognize affected files the user needs to look at their extensions, if they have a double extension, for example, picture.jpg.enc, it should mean they were encrypted as the malicious application marks its damaged files with the .enc extension. Such data can be decrypted only with specific decryption tools, so it would be easier to replace them with unaffected copies from cloud storage, removable media devices, etc. Clearly, the safest way to restore encrypted files is to erase the malware first. Thus, if you have backup copies and do not want to risk losing your money in vain, we recommend deleting Whoopsie Ransomware with no hesitation. In which case, you should ignore the displayed ransom note. At the moment of writing, it is a small red window titled “Whoopsie;” it asks to pay 50 euros for decryption to unspecified Bitcoin wallet.

The instructions could be updated if the hackers behind the malware decide to upgrade it. Still, we advise not to take any chances and get rid of Whoopsie Ransomware at once. To delete it manually users should follow the instructions available at the end of this article. As for users who prefer entrusting such tasks to antimalware tools, we would recommend installing a security tool you prefer with no hesitation. It may not only help users eliminate the malicious application, but also clean up the system from other possible threats too.

Get rid of Whoopsie Ransomware

Download Remover for Whoopsie Ransomware *
*SpyHunter scanner, published on this site, is intended to be used only as a detection tool. To use the removal functionality, you will need to purchase the full version of SpyHunter. 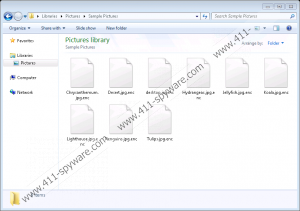