There is a huge nest of rogues and they are actually all alike, and the main difference between then is their names. To put it simply, it is one and the same rogue antispyware application, but it has many versions. Vista Security 2012 is a part of this group of rogues, and it could be inferred from its name that this fake antivirus program targets users that have computers running on Windows Vista operating system. Vista Security 2012 is a new version of Vista Security 2011, so you can expect this program to have a lot of nasty tricks behind its sleeve.

You might be susceptible to the infection while you browse the internet, because Vista Security 2012 is quick to exploit various system vulnerabilities. So you might get infected with the rogue via a drive-by download or by a Trojan that has been lurking in your system for some time now. That is because rogues like Vista Security 2012 seldom come alone. And once it does enter your computer and install itself without your permission, it unleashes a wrath that is hard to imagine.

First of all, it blocks your .exe files and does not allow you to open certain websites. Vista Security 2012 behaves like that because it needs to remain in your computer for as long as possible. The longer it stays the possibility to steal your money increases. Also, it prevents you from finding information on rogue removal. Instead, Vista Security 2012 redirects you to websites that are related to the rogue, and where you can purchase the full version of the program, but it is more than obvious that you should never do so, because then you would expose your financial information to the criminals behind this malicious software.

Next, Vista Security 2012 also does not allow you to operate your computer the way you are used to on regular basis. It will flood you with fake security notifications, saying that your computer is infected with spyware and you have to remove the threats immediately. For example:

Vista Security 2012 Alert
Security Hole Detected!
A program is trying to exploit Windows security holes! Passwords and sensitive data may be stolen. Do you want to block this attack?

System Hijack!
System security threat was detected. Viruses and/or spyware may be damaging your system now. Prevent infection and data loss or stealing by running a free security scan.

Malware Intrusion
Sensitive areas of your system were found to be under attack. Spy software attack or virus infection possible. Prevent further damage or your private data will get stolen. Run an anti-spyware scan now. Click here to start.

However, the messages are blatant lies and you should never follow the instructions received from Vista Security 2012. You should rather “register” the rogue using the following codes and then remove it for good:

Download Remover for Vista Security 2012 *
*SpyHunter scanner, published on this site, is intended to be used only as a detection tool. To use the removal functionality, you will need to purchase the full version of SpyHunter. 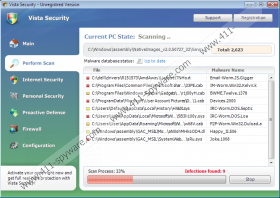 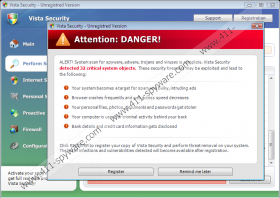 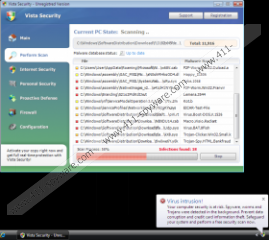