If you get infected with this rogue, it will detect that your computer runs on Windows Vista, and the rogue's interface will changed into Vista Defender 2013. It is very easy to get fooled by Vista Defender 2013, because upon the installation it might appear just like another Windows Security Center update. However, once Vista Defender 2013 gets installed, it modifies Registry autorun settings and as a result, the rogue loads every single time you turn on your computer.

Then Vista Defender 2013 performs a fake system scan, saying that things like Devices.2000, P2P-Worm.Win32.Duload.a or Email-Worm.JS.Gigger. Then it says that all these viruses can be removed if the user registers his copy of Vista Defender 2013, and pays for the full version of the program.

Activate your copy right now and get full real-time protection with Vista Defender 2013!

This is the message you see on the bottom left corner of the rogue's interface. Vista Defender 2013 also sends you a list of pop-up messages that are supposed to push you into buying the license:

Privacy threat!
Spyware intrusion detected. Your system is infected. System integrity is at risk. Private data can be stolen by third parties, including credit card details and passwords. Click here to perform a security repair.

Please note that the security notifications sent by Vista Defender 2013 and previous versions of the rogues are exactly the same. The same could be applied to the general infection symptoms as well. In the long run Vista Defender 2013 can block your Internet browser under the pretense that it is infected and the rogue needs to protect your from dangerous threats.

You need to register the rogue with this activation key: 3425-814615-3990. This will stop Vista Defender 2013 from sending you tons of fake security notifications. You also need to acquire a good security tool in order to remove Vista Defender 2013 from your computer. Otherwise the rogue will regroup and attack you once again, trying to ruin your system and steal your money.

Download Remover for Vista Defender 2013 *
*SpyHunter scanner, published on this site, is intended to be used only as a detection tool. To use the removal functionality, you will need to purchase the full version of SpyHunter. 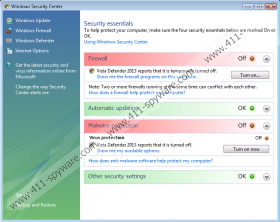 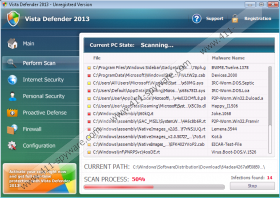 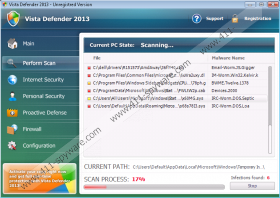