It has become increasingly more difficult to distinguish between genuine security tools and rubbish rogue applications like VirusHeat. This seditious rogue antispyware tool is hosted in the Ukrain, and its developers claim that they have been working on this rogue since 2000. They also claim that their rubbish application will protect users’ PCs against threats and infections, and that it will remove any malware and spyware from the system. This is simply untrue. VirusHeat is simply a clone of VirusHeat 4.4, which also emanates from the same family of rogues as SpyDawn.

This rogue security tool will enter the system without the user’s permission and hide its presence until such time that it is ready to start its attack against the system. This is done by using seditious browser hijacking websites which forcefully redirect users to compromised landing pages which make use of drive-by download tactics. Other forms of infection used by VirusHeat include using bogus online malware scanners and infected online malware scanners.

Once VirusHeat manages to securely root itself in the system it will start its attack by generating a fake system scan. This fake scan will inform the user that his system is being attacked, and that the user needs to purchase VirusHeat in order to stave off these attacks. Do not fall for these blatant lies and manipulation.

Secure your PC and destroy VirusHeat with the help of a powerful and genuine security tool. Investing in a properly functioning and updated security application will not only erase VirusHeat from the system but also protect your PC against future similar harmful threats and attacks.

Download Remover for VirusHeat *
*SpyHunter scanner, published on this site, is intended to be used only as a detection tool. To use the removal functionality, you will need to purchase the full version of SpyHunter. 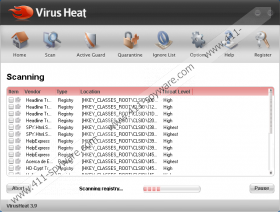