Vapor Ransomware is a malicious file-encrypting application that displays a window saying “You Have Been Caught.” We should also mention that before the window appears the malware’s victims may hear particular music, which the threat plays for a few moments. Our specialists describe it as unpleasant or creepy. It is probably meant to scare the infection’s victims, so they would be more willing to do as the malicious application’s developers demand. They do not ask anything else besides contacting them via email, but we have no doubt their reply would tell how much they want to receive in Bitcoins or another cryptocurrency. In case you do not wish to fund hackers, we encourage you not to contact them. Instead, you could remove Vapor Ransomware from the system. It will not restore encrypted files, but keeping it on the system might be a bad idea as you could accidentally relaunch the malware and encrypt other data.

The malicious application might be distributed through various channels, such as Spam emails or unreliable file-sharing web pages. Thus, the file that infects the system with Vapor Ransomware could be any recently obtained email attachment, update, setup file, and so on. If you do not scan files downloaded/received from the Internet with a reliable security tool first, we would recommend doing so in the future so you could avoid infecting your system accidentally. You do not have to scan every single file if you are one hundred percent sure they can be trusted. However, files that raise suspicion should be checked first. How to identify potentially dangerous data? For instance, if it is an email attachment, it might be sent by someone you do not know. Also, the message coming with the file could contain grammar mistakes, or it could be written in a way to scare you into opening the attachment right away.

What happens if the computer gets infected with Vapor Ransomware? The first, the malicious application is supposed to locate all targeted files, which could be your photos, videos, archives, and other personal data. Then the malware should start encrypting them with a robust encryption algorithm. To mark each affected file, it ought to append the .VAPOR extension, for example, cute_pandas.jpg.VAPOR or ticket.pdf.VAPOR, and so on. Once the threat finishes encrypting all targeted files, it should play the music we described in the begging of the text and display a pop-up window with detailed instructions. We call it a ransom note. It explains that the only way to decrypt user’s files is to contact Vapor Ransomware’s developers via email. We believe users who do so should be asked to pay a ransom since such malicious applications are almost all created for money extortion.

Provided you do not want to pay, you should ignore the note and get rid of Vapor Ransomware. The instructions located below the article can explain how to eliminate the malware manually. This task could be complicated for inexperienced users, and if it seems difficult to you, we encourage you to employ a reliable security tool instead. Lastly, do not forget you can switch encrypted files with copies of them stored on removable media devices, cloud storage, etc. when the system is clean again.

Get rid of Vapor Ransomware

Download Remover for Vapor Ransomware *
*SpyHunter scanner, published on this site, is intended to be used only as a detection tool. To use the removal functionality, you will need to purchase the full version of SpyHunter. 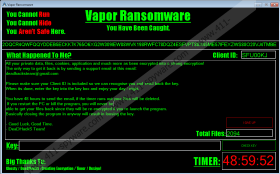