It is not late to remove United Kingdom Police Virus if you have just found its full-screen message on your screen. If you are asked to pay a fine of 100 British pounds via Ukash or Paysafecard, ignore the message and remove the threat. A lot of different institutions are presented in the message, including Cheshire Police Authority, Metropolitan Police, Police Central e-crime Unit, International Cyber Security Protection Alliances (ICSPA) and European Cybercrime Center. None of these institutions is related to the charges you are provided with. The accusations against you are listed to make you think that you should immediately pay the fine although it is enough to remove the threat, which is known as a variant of the Urausy Trojan.

The following examples are the statements taken from the bogus message:

The amount of the fine is £100. You can pay a fine Ukash or Paysafecard.

When you pay the fine, your PC will get unlocked in 1 to 72 hours after the money into the State’s account.

If you look closer, you will see that the foregoing example is identical to the statement found in the message of FBI Cyber Crime Division Virus. The only difference between the two interfaces is that United Kingdom Police Virus requires that the money be paid via Paysafecard or Ukash. Naturally, the logos of the British law enforcement institution are presented in order to make you think that the message is real, but if you contact the British police, you will find out that they do not attempt to suspend you from using the computer in this way. FBI MoneyPak Virus, Virus Ministère de L’intérieur, Stop Online Piracy MoneyPak Virus and others also show the credential of authoritative institutions to deceive computer users.

Instead of thinking where you could change your money into a Paysafecard or Ukash voucher, jump to our instructions which will show you how to install SpyHunter that will remove United Kingdom Police Virus and other threats in no time.

Download Remover for United Kingdom Police Virus *
*SpyHunter scanner, published on this site, is intended to be used only as a detection tool. To use the removal functionality, you will need to purchase the full version of SpyHunter. 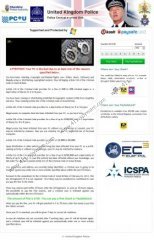