If you are looking for a genuine and powerful security tool with the ability to protect your PC against known threats and infections, then you will definitely not want to have anything to do with Ultimate Antivirus 2008. This disgusting rogue antispyware application was designed not to be of any benefit to a PC, but instead to act as a vehicle with which ridiculous criminal software developers rip honest consumers off. Ultimate Antivirus 2008 emanates from the same family of rogues as System Antivirus 2008, Windows Antivirus 2008 and Vista Antivirus 2008, and is equally as harmful and destructive as its predecessors.

If you are wondering how this rogue manages to enter the system, Ultimate Antivirus 2008 uses any nefarious tactic at its disposal. This can range from using bogus online malware scanners, seditious browser hijacking websites and infected online flash ads as a part of its online marketing campaign. As of late it has also been reported that Ultimate Antivirus 2008 bundles its Trojans and malware together with other third party security downloads and updates.

The rogue will start a fake system scan once it manages to root itself into the system securely. This fake system scan will yield bogus scan results which will inform the user that his system is being attacked, and that he needs to pay for Ultimate Antivirus 2008 in order to protect his system. Shortly following this the user will find himself being spammed with numerous fake security alerts in the form of incessant and annoying pop up messages. These will tell him the same thing, informing the user that he needs to purchase Ultimate Antivirus 2008.

Symptoms associated with this rogue range from blocked Internet connections and the inability of the user to launch applications on the infected PC. This is done with a specific intent of further panicking and frustrating the user, but also to prevent him from running or downloading an application which may be able to detect and remove Ultimate Antivirus 2008 from the system.

Take back control of your PC and destroy Ultimate Antivirus 2008 with the help of a genuine security tool. This will also protect your PC against future similar attacks and threats.

Download Remover for Ultimate Antivirus 2008 *
*SpyHunter scanner, published on this site, is intended to be used only as a detection tool. To use the removal functionality, you will need to purchase the full version of SpyHunter. 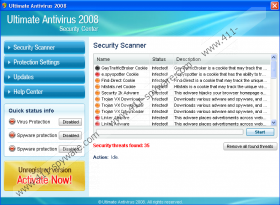