It would seem as though the developers of the fake Microsoft Security Essentials scam has been hard at work with their latest rogue security application – Think Point. This rogue not only forms part of this outrageous and heavily detested scam, but is completely incapable of living up to any of its over embellished promises. Think Point enters the system surreptitiously and without the user’s permission. Of course this rogue will do everything in its power to gain the trust of its prospective victim, but despite this Think Point certainly has no ability to indentify or remove any type of threat from the system as it nothing more than a malicious infection in itself.

Think Point will spam the user with various fake alerts, stating that Think Point is

This is definitely not the case, and merely another ploy to lower the user’s guard. Think Point will then initiate a fake system scan which will yield various fake threats on the system, such as the well documented Win32/Trojan. It will then proceed to inform the user that it cannot remove the detected threats because some parts of the heuristic module are missing. Think Point will offer to install the mission modules, but only doing so after the user pays more than $90 for these. The fake alert presented to the user will read as follows:

Even if you were to spend you hard earned money on paying for this worthless rogue, you will continue experiencing the degrading of your PC. This will come in the form of slow and poor system performance, blocked Internet connections and compromised PC security, as Think Point will install more malware to the system. Other symptoms also include increased erratic system performance, and the random generating of Desktop items.

In order to take back what is rightfully yours, destroy Think Point with the help of a powerful and effective security application. This will not only erase Think Point but offer adequate protection against similar attacks in future.

Download Remover for Think Point *
*SpyHunter scanner, published on this site, is intended to be used only as a detection tool. To use the removal functionality, you will need to purchase the full version of SpyHunter. 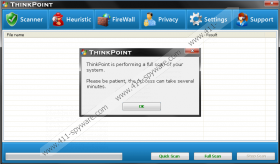 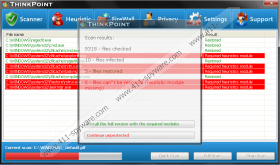 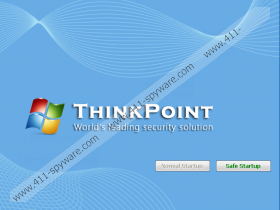