The Fulltab is a suspicious program, to put it lightly. During its detailed analysis, our malware experts have found out that it functions in a rather invasive manner. Due to such functionality, this application has been classified as a browser hijacker that no user should have active on their PC. Unfortunately, quite a few users already have it active on their personal computer since it is advertised in a misleading manner, to say the least. You might come across claims stating that this suspicious application should be used to improve your online experience. Unfortunately, this is not the case in reality, since this devious piece of software will only trigger unwanted changes that will make your online experiences annoying and frustrating. In some cases, it might even prove to be quite dangerous. To find out more about The Fulltab and how you can delete it, make sure to read the rest of our report.

The Fulltab is known to affect major web browsers such as Google Chrome, Mozilla Firefox, and Internet Explorer. Such wide compatibility means that large numbers of users could be affected by this suspicious program. During our research, it has been discovered that this hijacker exhibits a number of invasive features. Right after it gains full access to your operating system, it will modify your default homepage and new tab page without any notification. These undesirable changes are made and kept intact with the help of a third-party browser extension. It goes without saying that such functionality will make surfing the web a much more annoying and frustrating experience. Basically, for as long as this hijacker will be active on your PC, you will be forced to use a suspicious third-party site as your default homepage. The same thing will happen with your new tab page as you will be presented with a suspicious site instead of a blank page that you are used to. In addition to such alterations, it has been discovered that the hijacker in question could also prove to be the main reason your browser might be flooded with third-party web content. This is so because the suspicious extension can connect to a dubious adware server. It goes without saying that third-party ads, pop-ups, and coupons will make surfing the web a much more bothersome task than you are used to. To regain your browser's default functionality and to surf the web the way you are used to, make sure to delete The Fulltab as soon as it is found up and running on your PC.

As mentioned earlier there is something much more alarming about The Fulltab than you might think at first. During our detailed investigation, we have discovered that there is a chance that your PC could be exposed to suspicious and even malicious online content if you allow this hijacker to be active on your computer. As it turns out some of the ads or pop-ups provided by this invasive application could be hosting potentially harmful redirect links. Thus, clicking on such suspicious content could lead you to dangerous sites. There is a chance that you could end up on sites that are crafted in a way to infect your computer. Usually, such web pages are designed by malware developers and run an arbitrary code execution exploit. In quite a few cases just entering a site that has this particular exploit will trigger a silent installation of some unknown malicious program. In other cases, you could end up on fake online shops that are created by cyber criminals so they could steal your credit card data and so profit illegally. It goes without saying that The Fulltab could prove to be a major virtual threat. Do not take any chances with it and conduct its complete removal right away.

Follow the removal instructions of The Fulltab with care as a single mistake could result in an incomplete removal. This means that traces associated with this hijacker could still be active on your PC and might be used in a devious manner. For example, leftovers of The Fulltab could be used for its restoration procedure. If you want to avoid finding yourself in such a situation, make sure to double-check your operating system for potential traces linked to this devious program. This way you will be sure that no unwanted files or registry entries are active on your PC.

How to remove The Fulltab from your PC

Download Remover for The Fulltab *
*SpyHunter scanner, published on this site, is intended to be used only as a detection tool. To use the removal functionality, you will need to purchase the full version of SpyHunter. 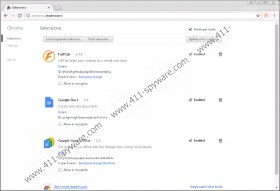 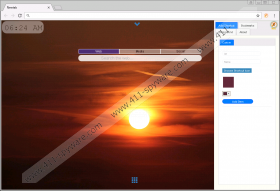