It has become increasingly more and more difficult to distinguish between genuine and rubbish rogue antispyware applications like System Tool 2011. This rogue in particular is a vicious fake security application which was designed by detestable cyber criminals to trick users into paying for their worthless software.

Once System Tool 2011 manages to securely root itself in the system it will start its attack against the PC by initiating an unwarranted and fake system scan. This fake system scan will inevitably yield bogus warnings of nonexistent threats supposedly running wild on the system. What is more, System Tool 2011 will terminate any application the user attempts to run on the infected PC, claiming that the program is infected and requesting that the user pays for and activate System Tool 2011 so that it can fix this threat. It will present the user with the following fake alert:

Security Monitor: WARNING!
Attention: System detected a potential hazard (TrojanSPM/LX) on your computer that may infect executable files. Your private information and PC safety is at risk. To get rid of unwanted spyware and keep your computer safe you need to update your current security software.
Click Yes to download official intrusion detection system (IDS software).

Warning: Your computer is infected
Windows has detected spyware infection!
Click this message to install the last update of Windows security software…

System Tool Warning
Intercepting programs that may compromise your private and harm your system have been detected on your PC.
Click here to remove them immediately with System Tool.

In order to limit the damage this rogue will cause to your PC, and restore your system’s security and privacy you will need to permanently destroy System Tool 2011. This is safest achieved by making use of a properly functioning security tool which will not only obliterate System Tool 2011 but also protect against similar attacks in future.

Download Remover for System Tool 2011 *
*SpyHunter scanner, published on this site, is intended to be used only as a detection tool. To use the removal functionality, you will need to purchase the full version of SpyHunter. 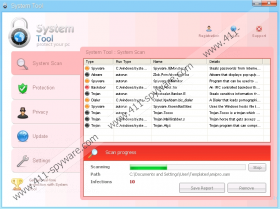