Swift PC Optimizer is a potentially unwanted program that functions as a system optimizer. System optimizers are often rather shady applications that seldom live up to their promises. Although they come forth saying they can improve your system’s performance, it is very likely that they cannot do everything they say. Instead, they aim to rip you off by selling you a product that does not work properly. Therefore, it would be for the best to remove Swift PC Optimizer from your computer, as we are sure that this application may have a lot more up its sleeve than it says.

Perhaps there are security websites that say Swift PC Optimizer is a virus, but we obviously cannot resort to such drastic rhetoric because the program is not a malicious infection. It even has an official homepage, and we can access it via swiftpcoptimizer.com. There, we can find out more about the program. It says that Swift PC Optimizer “has been awarded as one of the best utility to clean and optimize Windows computer. Its fast and effect scan engine removes all unwanted junk files and registry errors within minutes.” Normally, there is a lot of unnecessary clutter in your Windows registry because of the programs you often install and uninstall. And here comes this application saying it can take care of it. But can it really do that?

Well, if you download the program and install it on your PC, you will be able to run a full system scan. During the scan, it is very likely that Swift PC Optimizer will detect a lot of system errors. During our scan on a test computer (which is usually very clean), this application found 556 errors in the Registry, 132 errors in the Windows system, and more than 1300 errors in your web browser. Once the scan is complete, we can click the Fix Now button to get rid of those errors, but Swift PC Optimizer does not do that for free.

We need to purchase the full version of this application to fix the errors that supposedly are slowing down our system. While it is only logical that you should pay for good service, the payment transaction for Swift PC Optimizer does not get approved by the seller (via click2sell.eu), and so the full version of the program does not reach you. Consequently, it is not possible to “fix” the said errors.

Our main problem with this application is that it may also come bundled with freeware, so it is clear that it is not as safe as it is supposed to be. Also, it may collect user’s information for marketing purposes. Thus, the longer this application remains on your system, the more security issues you may face in the future.

It is easy to uninstall Swift PC Optimizer because you can do it via Control Panel, like any other regular program. On the other hand, if you think that there might be more unnecessary apps on-board, it is always a good idea to scan your PC with the SpyHunter free scanner. Should you find more undesirable programs, do not hesitate to remove them automatically.

How to Remove Swift PC Optimizer

Download Remover for Swift PC Optimizer *
*SpyHunter scanner, published on this site, is intended to be used only as a detection tool. To use the removal functionality, you will need to purchase the full version of SpyHunter. 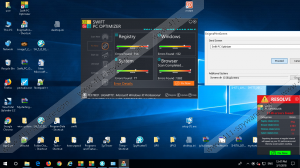