Thanks to Super AV and similar rogue security tools, it has become increasingly more difficult for users to distinguish between genuine and fake security tools. This rogue in particular derives from the same vicious family of rogues as Antivirii 2011. This alone should speak volumes as to its legitimacy. Despite its best efforts to convince its prospective victims otherwise, Super AV is simply unable to live up to its promises of protecting PCs against threats, or from removing any infection or threat present on the system.

Fake security scanners, hijacked websites and infected online flash ads form part of Super AV’s online marketing campaign. Using these tactics Super AV gains surreptitious and clandestine entry to its victims’ PCs and it will remain dormant until such time that it is able to start its attack against the system. This will happen by Super AV initiating a fake security scan of the system. This scan will be configured to load each time the user logs on to Windows.

Super AV – Malware detected
Threats have been detected!
Warning! Some Serious threats have been detected to your computer, that need to be removed instantly or they may cause critical damage to your computer!
Super AV can remove these viruses easily, and prevent damage to your personal computer.
If you click “Remove viruses”, you can protect your computer from destruction, however, if you click “Continue unprotected, your identity may be compromised and you may lose all of your important files and experience system slowdown.

Your system is infected! Your computer is compromised by hackers, adware, malware and worms! Super AV can remove this infection. Please click this icon to remove threats"

In order to protect your PC against the damage caused by this malicious rogue, and to restore your system’s protection and privacy, destroy Super AV using a powerful and legitimate security tool. This will get rid of Super AV and also protect you against any future similar attacks.

Download Remover for Super AV *
*SpyHunter scanner, published on this site, is intended to be used only as a detection tool. To use the removal functionality, you will need to purchase the full version of SpyHunter. 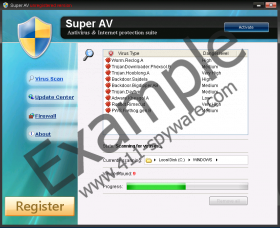