SpyHeals is not capable of removing viruses, it can only exploit malicious advertising strategies in order to force through its phony licenced version.

Via compromised websites, used as platforms for transmitting the infection, hackers deliver the Trojans that carry the rogue to the targeted computers. Trojans usually exploit vulnerabilities found in a machine in order to enter it. When these malware pieces manage to get inside, they start displaying fake alerts and warnings that state there is a great security risk for the PC. This is the first part of SpyHeals' plan, which is exactly to scare the victims and then make them purchase its fake services. The fact that rogues use such scare-tactic is why they are also called scareware.

After the first few bogus notifications, a scanning window is shown that pretends to be working hardly. In fact, it does nothing like detecting viruses, at the end of the scan it displays a made-up list of infections and their "Threat Level" is described as "High" and in very rare cases as "Medium", in order to make the scan look legitimate. Then, the fraudulent program evokes a small pop-up and the following text is displayed:

Whatever you do, do not pay for this application. SpyHeals cannot remove viruses, just the opposite – it can only open your computer up for more infections and gain profit in an illegal way. Use a genuine anti-virus software and remove this villain as soon as you spot it!

Download Remover for SpyHeals *
*SpyHunter scanner, published on this site, is intended to be used only as a detection tool. To use the removal functionality, you will need to purchase the full version of SpyHunter. 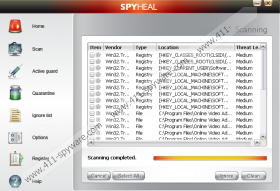