Whenever you are about to install a relatively unknown application on your computer, like SpeedyMediaConverter, you should double-check whether the program is reliable or not. In this case, you should think twice before installing SpeedyMediaConverter because this application is categorized as a potentially unwanted program. This means that while the program is not outright malicious, it may possess particular features you would not like. Therefore, it would be for the best to remove SpeedyMediaConverter from your system, and then scan the PC with a computer security tool of your choice. You need to make sure that your system is 100% safe.

There are many reasons why this application cannot be considered a computer infection, and one of them is that SpeedyMediaConverter comes with an official website where you can download it without any problems. The main homepage is located at speedymediaconverter.com, and it has a working download button. You may also read more on the program at the site although practice shows that users tend to click the download button without bothering to read any additional information. They often think that if the program does not live up to its promises, they can simply remove it.

While there is some truth to it, you should also consider all the potential security risks of keeping SpeedyMediaConverter on your PC. Not to mention that it is also possible for this file converter tool to come bundled with freeware. If that is the case, then you most probably did not even want to have it, and if this program keeps on popping up on your screen, you may think that SpeedyMediaConverter is an obnoxious application. Now, if it really was installed along with other freeware, then you the truth is that you have to remove several applications from your PC. Freeware apps may not be direct computer security threats, but it is only a matter of time until they get exploited by malevolent third parties for their purposes.

As far as the functions of this program are concerned, our tests show that SpeedyMediaConverter seldom works properly. It says that it can encode HD videos in .avi, .wmv, .mp4, and many other formats, but we have found that the application does not perform the promoted functions. What’s more, judging from its homepage, SpeedyMediaConverter is a direct clone of ExpressMediaConverter and Super Media Converter. The fact that there are several applications that share the same homepage layout and even the same functions is somewhat suspicious. Why would you need several different applications when one would be enough to perform all the advertised functions?

Thus, we can assume that the program is not as useful as it claims to be. What’s more, SpeedyMediaConverter supports third-party advertisements and can even collect information on your web browsing habits. This is not much of a problem because a lot of popular websites do that to customize their content for you. However, you can never be sure who will use the data collected by SpeedyMediaConverter.

If you want to protect yourself from potential criminal exploitation, you need to terminate all the potentially unwanted programs from your PC. Clearly, SpeedyMediaConverter is one of those applications. Therefore, open Control Panel and remove it right now. Should you need any further assistance with software removal, please leave us a comment below.

Download Remover for SpeedyMediaConverter *
*SpyHunter scanner, published on this site, is intended to be used only as a detection tool. To use the removal functionality, you will need to purchase the full version of SpyHunter. 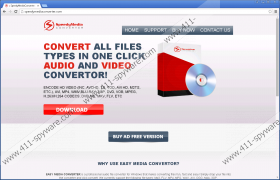