Also, right after this malicious program enters your PC a fake system scan will be launched. It will detect various fake virtual threats. It is another scare tactic that Security Bytes Win XP 2015 employs. Once the scan is finished you will be presented with a message telling you that you must purchase a full version of this worthless application in order to clean the alleged virtual threats. Keep in mind that everything Security Bytes Win XP 2015 is presenting to you is fake and should be ignored at all times. It goes without saying that payments for this worthless application should not be made, as you could provide cyber criminals with your credit card data. All of this should be enough to make you realize that Security Bytes Win XP 2015 must be removed ASAP.

We firmly advise you to use a reliable antimalware tool in order to remove Security Bytes Win XP 2015 as manual removal is often too complicated for a regular computer user as it involves manual registry editing. Removal using a licensed malware detection and removal tool will ensure that every bit of this invasive infection is deleted.

Download Remover for Security Bytes Win XP 2015 *
*SpyHunter scanner, published on this site, is intended to be used only as a detection tool. To use the removal functionality, you will need to purchase the full version of SpyHunter. 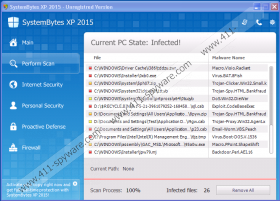 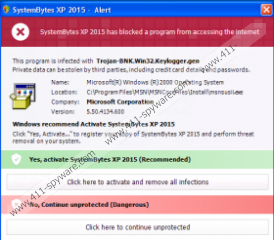